The base, or fender, was originally a simple, functional item used to guard the skirt against knocks and bumps. It has evolved in both design and purpose throughout the decades. 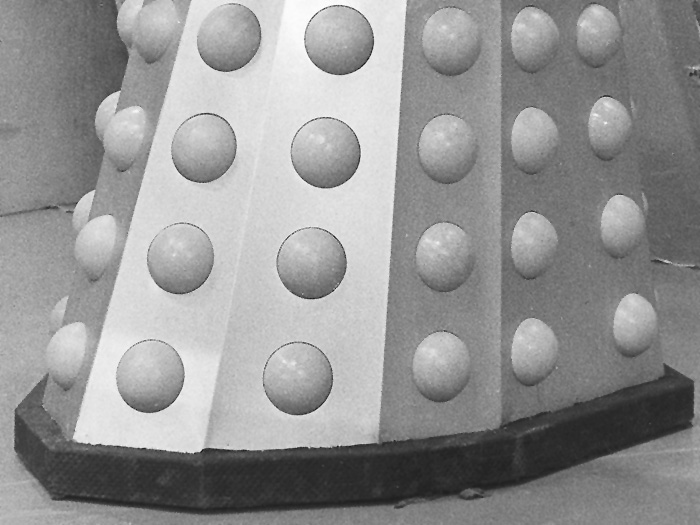 The base section on the original 60s TV Daleks was a slim wooden construction covered with a layer of black material, possibly some kind of rubber or rubberized fabric. The base acted as a chassis for the small wheels and a solid frame to support the skirt and the rest of the Dalek.

During the first story, The Daleks, the props were only required to run across studio floors, so there is very little ground clearance between the floor and the lower edge of the base section. At this stage, the base sides are entirely solid, with no material hanging down. 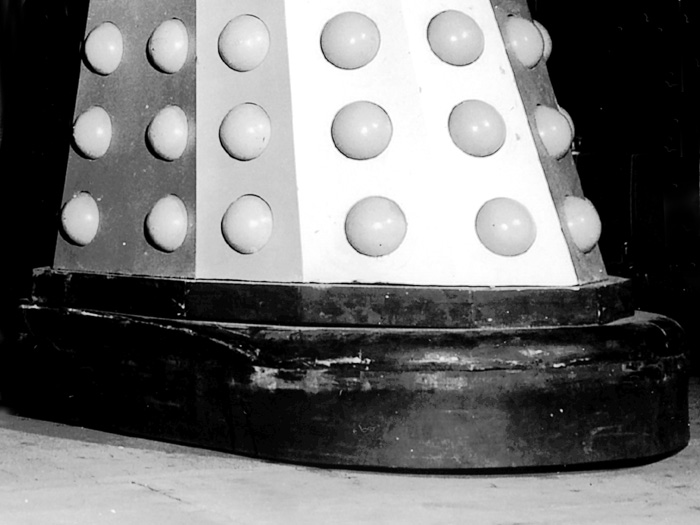 For the second Dalek story, The Dalek Invasion Of Earth, the script required the Daleks to travel over rougher surfaces, especially during outdoor broadcast scenes in central London. To achieve this and to hide the modified running gear, the Daleks were given a second fender below the standard base used previously.

This new fender was made of a wood and fibreglass upper shell and had a curtain of black rubber draped around its edge. This hid the larger wheels from sight while allowing a degree of flexibility for negotiating bumps, potholes and kerbs. 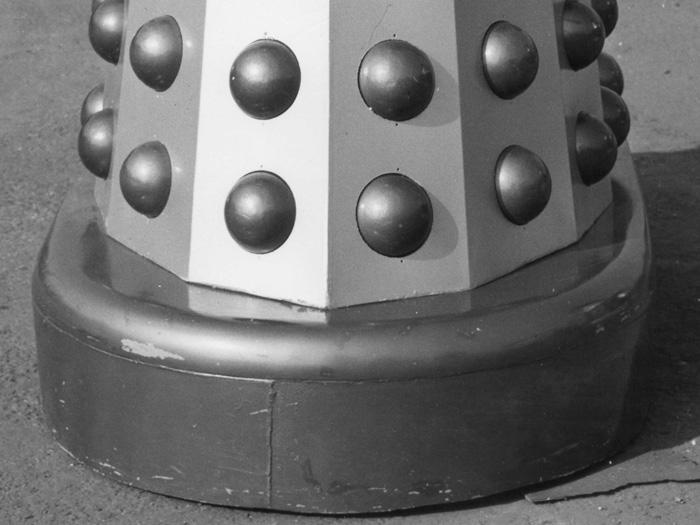 The fenders in the first Dalek movie followed the design of the larger fenders used in the TV version of The Dalek Invasion Of Earth. On this occasion, the smaller 'standard' base was deleted and the skirt was placed directly on top of the new-style fender.

The construction of the first movie fenders was slightly different from the TV version. Because all the Dalek scenes were studio-based, with no uneven surfaces, the fender top and sides were made as a single fibreglass construction with only a small amount of ground clearance. Beneath the fibreglass was a wooden frame to which the wheels were attached. 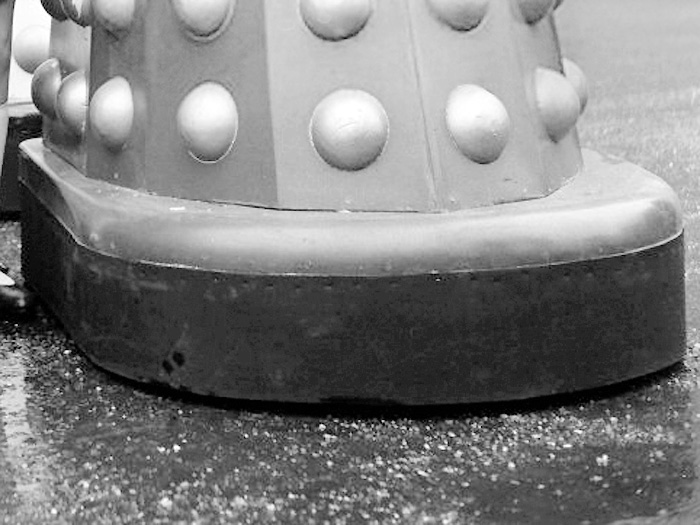 The second Dalek movie, like the second TV story (essentially the same script) required the Daleks to move around over uneven surfaces. to achieve this the vertical walls reverted to rubber.

This change gave the fender sections the flexibility and 'give' that they needed for travelling over rock and rubble in ruined 'London'. The rubber areas are coloured black, while the upper sections varied in colour depending on the colours of the Daleks they were attached to. Once again an inner wooden frame was supported by large caster-type wheels. 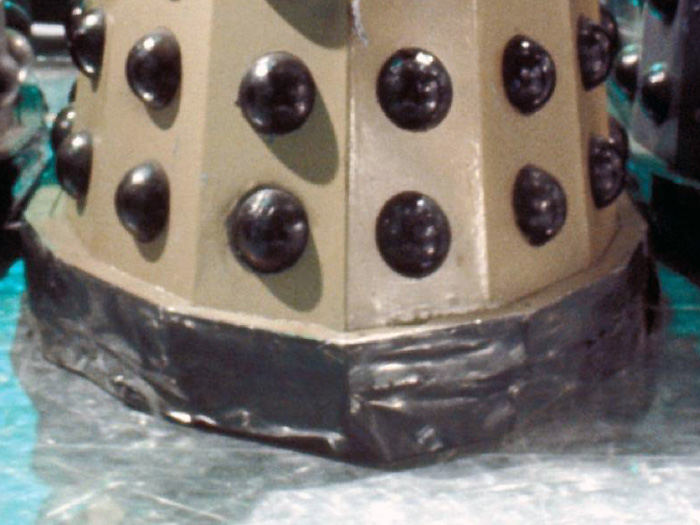 During the 1970s the standard TV Dalek bases were given greater ground clearance. This was due to larger casters fitted to make the Daleks more manageable for outdoor use. The props were also occasionally mounted on tracks for filming in extremely rough terrain. The larger running gear was hidden away behind a simple layer of rubber or plastic sheeting attached around the original base section.

One movie fender made an appearance on TV during the 1970s in Planet of the Daleks (see inset photo). This fender was of the type used in the second movie, with the rubberized edging rather than the all-fibreglass type used in the first movie. 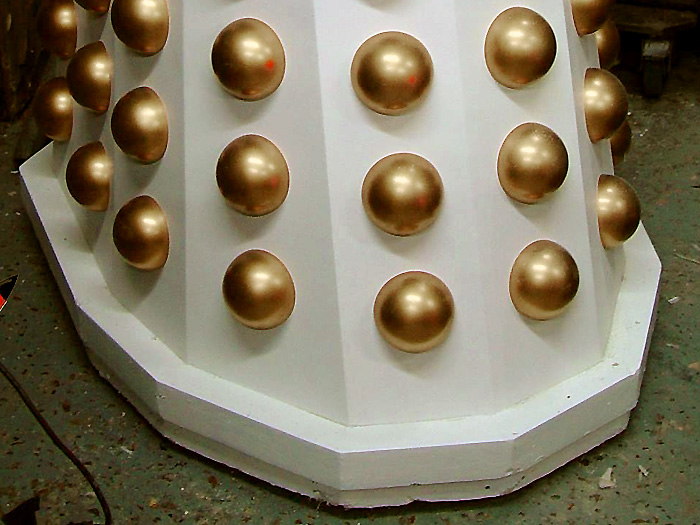 The majority of Dalek bases during the 1980s remained pretty much unchanged from the configuration seen throughout the 1970s. Ride heights changed slightly from prop to prop but the overall look remained the same.

It was not until Remembrance Of The Daleks that a slightly revised base design appeared. The Imperial Daleks (and some Renegades) had a fibreglass base section which was integral to the skirt. The lower portion had a slight recess

Ground clearance was fairly minimal and the Daleks appeared to sway as they moved, running on round plastic wheelbarrow wheels with small casters as stabilizers. 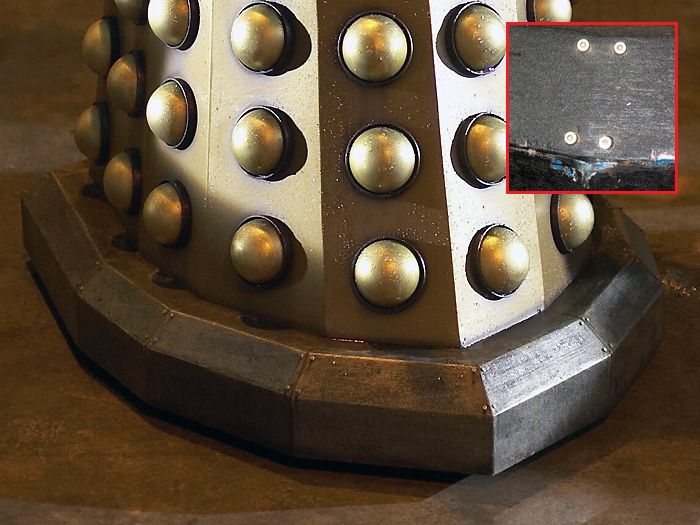 The 2005 Series Dalek fender is proportionally similar to those from the 1960s movies. Larger than any standard TV base section seen previously, it is a mixture of designs, being both angled (TV) and tall/wide (movie).

Made from thick fibreglass, the fender is integral to the skirt in all but one case. Inside is a metal frame, to which the casters are attached, and which supports the weight of the Dalek. The outer surface is finished with a rough texture and has small bolts fitted at the corners to suggest a tough 'heavy-duty' look. 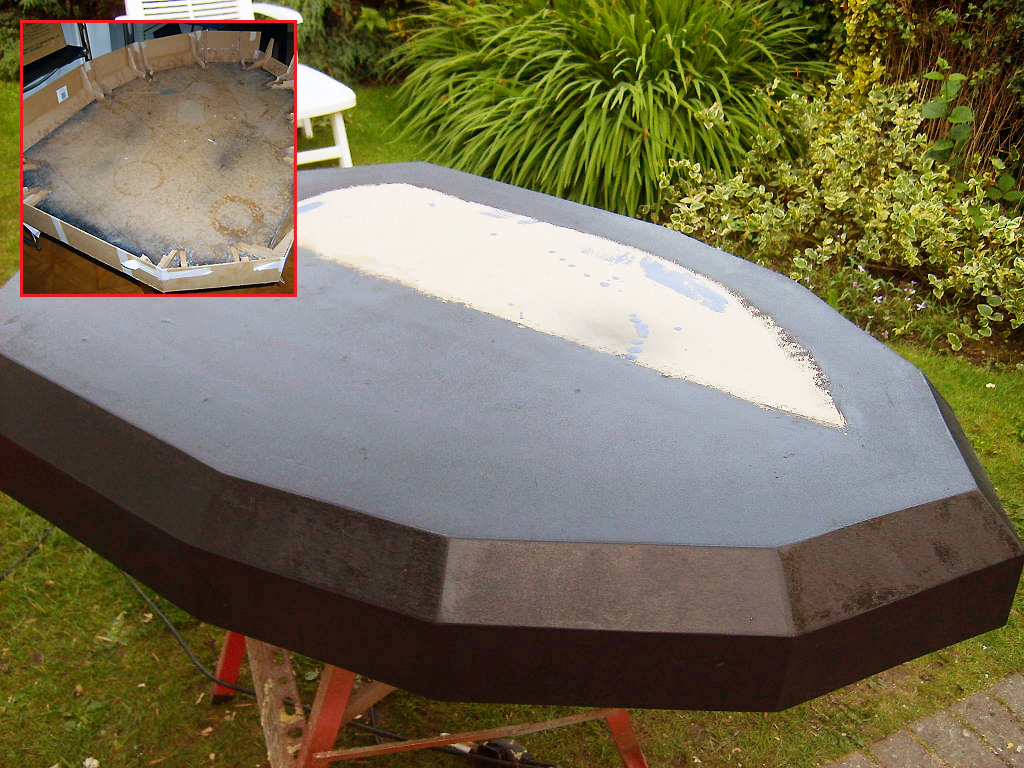 The fenders from the classic TV Daleks are easily made from wood and require little explanation. Movie fenders can be made in the same way and shaped and are most often subsequently cast in fibreglass.

For the more-complex New Series Dalek fender, a light wooden construction will suffice if GRP moulding is your intention. If the wooden version is the finished article, then sturdier materials should be used. Seams and panel angles can be reinforced with fibreglass matting and blocks from the inside.

If the finished Dalek is to go out in public, or on rough terrain, additional ground clearance should also be considered as the fender walls are easily damaged. 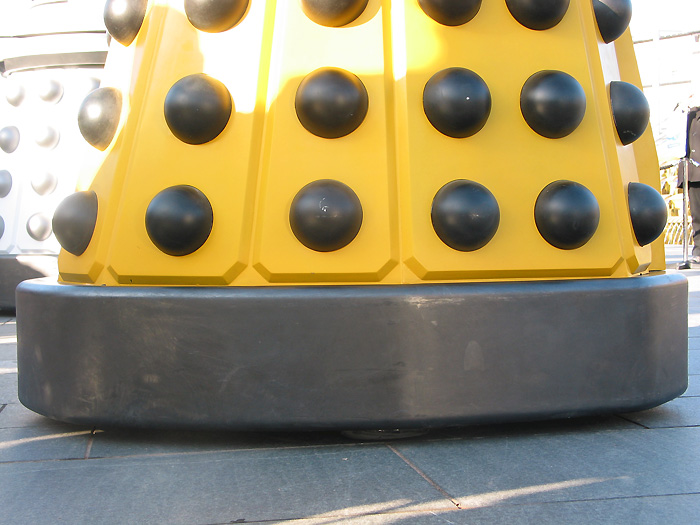 The latest Daleks are fitted with a fender which pays homage to the fenders seen in the Dalek movies. Although the shape is very similar, the re-designed Daleks' fenders lack the elegance of their 60s cousins.

The 60s movie Daleks had fenders with sweeping curved fronts, which tapered gently into a sharper curve, as the arc of the front met the sides. The re-designed fenders have the same top-to-side curve all the way around.

They are made entirely from fibreglass and consequently, they struggle to climb even the shallowest of slopes, without the bottom getting caught. This suggests that they were probably designed with studio work in mind.