Present on every Dalek, from the earliest to the New Series Dalek, the collars are an important part of Dalek design. Much can be said about the subtle differences in collars, from prop to prop. However, here is a short overview. 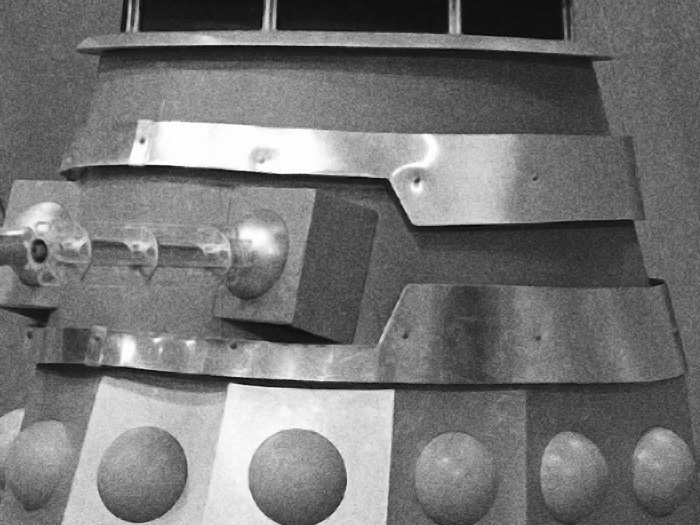 Shoulder collars, as seen in the first two Dalek TV stories and also in the first movie, have no mesh or slats covering them. The collars are made up of four separate arc-like shapes of aluminium sheet. Two make the upper collar and two are used for the lower collar. The collar sections are joined together at the front and rear of the Dalek by small rectangular jointing plates.

Dalek builders mainly use aluminium when making collars, preferring to stick to the original materials. However, hardboard and thin MDF have also been used successfully to make very convincing collars. 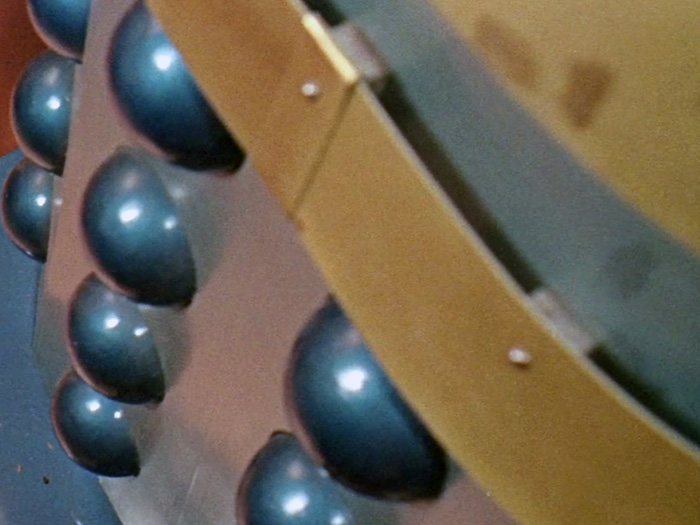 The first movie Daleks had gold coloured collars that were made and fitted in exactly the same way as the TV versions. The only difference was in the depth - the lower collar was slightly deeper at the front, under the gun and arm boxes.

Dalek collars were not fitted directly to the shoulders. Small wooden packing pieces were added in order to create an offset from the main body (see photo). This offset allowed the lower collar's bottom edge to overlap the top of the skirt section, hiding the join between the shoulders and the skirt. 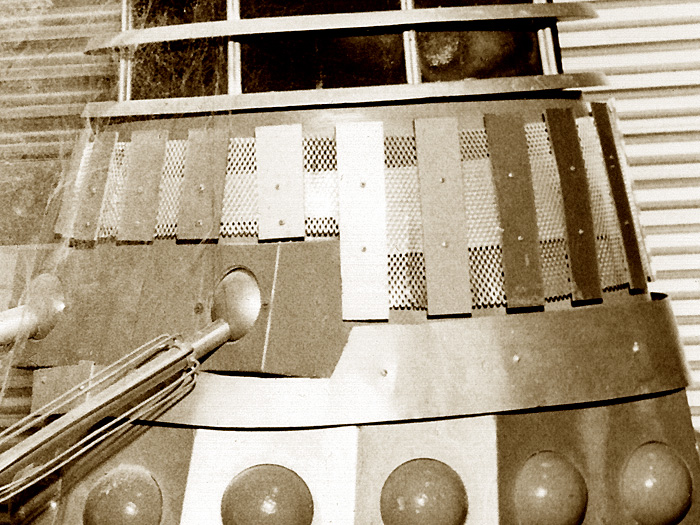 From The Chase onward, Daleks were dressed in mesh and slats that almost obscured the upper collar. Despite the addition of this extra layer, the collars beneath remained unchanged and were still the originals from the previous stories.

The design of the collars would remain unchanged throughout the 1960s and the 1970s. By the 1970s their bare aluminium look had given way to various colour schemes - most popular of which was a simple grey. The dull colour schemes often hid the fact that the collars were becoming extremely dented and buckled. 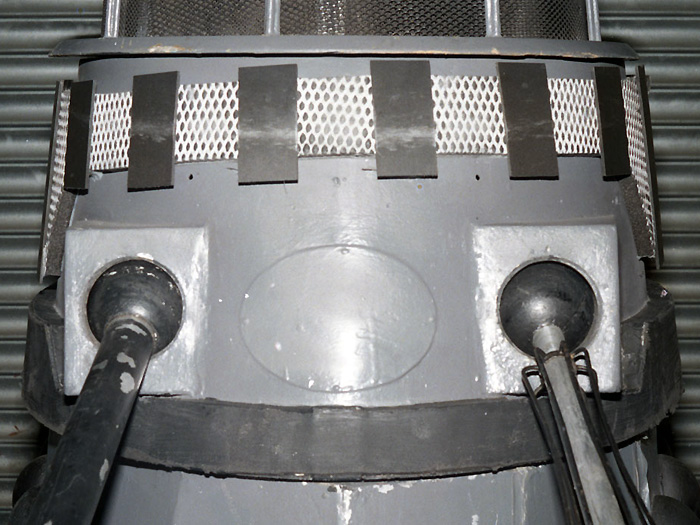 During the 1980s the design of the Dalek shoulder section was simplified during the production of a new batch of props. The collars became part of the shoulders - part of the actual fibreglass casting - rather than separate entities.

The lower collars of most Renegade Daleks from Remembrance of the Daleks clearly shows this. This is the point where metal collars, which had been a Dalek trademark throughout the previous two decades, finally disappeared for good.

The new collars had no additional bolts or joints to give them character. To add definition, some were painted black. 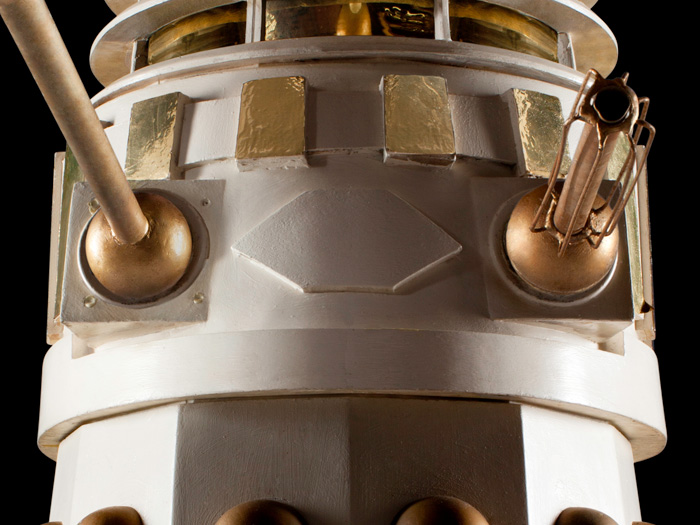 Imperial Daleks followed the lead of the Renegades by having collars which were an integral part of the fibreglass shoulder moulding. They also went a step further by including the slats too. Below the slats, the upper collar was much deeper than that of any previous Daleks. The lower collar on both Renegade and Imperial Daleks presents a problem. It is part of the shoulder moulding and so there is no overlap to cover the join between the shoulders and skirt.

Builders copying these moulded in collars tend to use either fibreglass or MDF with the layers of the collars built up in stages and backfilled. 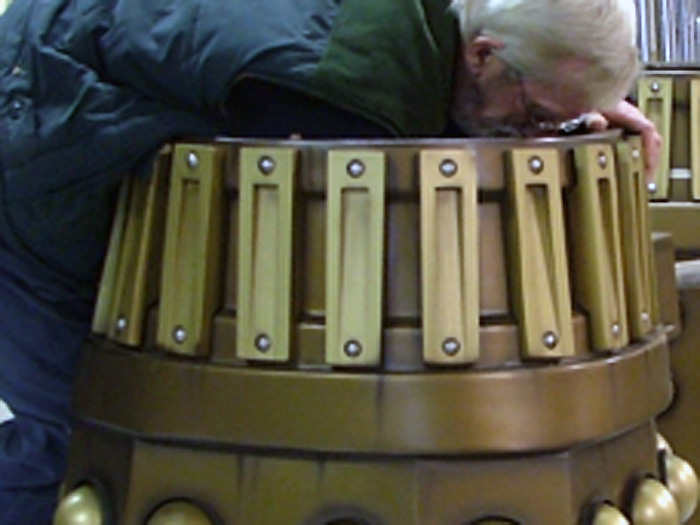 The collars on the New Series Dalek remain part of the shoulder moulding, though the slats are back to being separate parts. These shoulders and collars are the most complicated to date. The lower collar is actually two separate collars, running around a slightly smaller 'shrunken' inner shoulder section. The upper collar has been moved to the top of the shoulder moulding and protrudes only to the width of the shallower part of the lower collar.

Again, the join between shoulders and skirt is not covered because the lower collar does not overlap. However, this is unimportant for most of the props, as they have been built as all-in-one GRP units, with the skirt and shoulders joined. 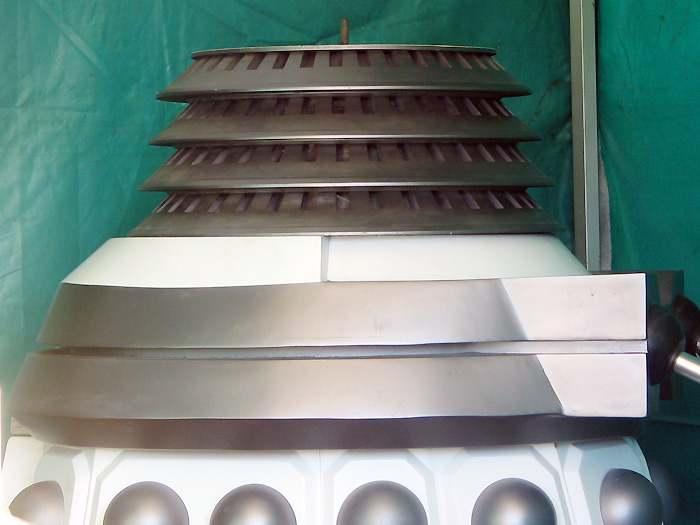 The re-designed Daleks from 2010 have collars which are integral to the shoulders. The design which comprises of two sets of collars, sandwiched together... depending on how you view things.

The design has dispensed with slats completely and reverted back to the plainer (but in this case, not sleeker) look of the original 60s Daleks. The collars follow the highly unusual (and controversial) shape of the shoulders and are also moulded into the vertical faces of the gun/arm boxes.

They have a tapered underside which further emphasizes the chunkiness of the shoulders and produces angles and proportions which were unheard of on Daleks until this design was dreamt up.