The Dalek dome has gradually evolved over the years. Although the basic size and shape of the dome remains the same, there are now four distinct versions. Getting the correct style of dome for your Dalek is very straightforward... 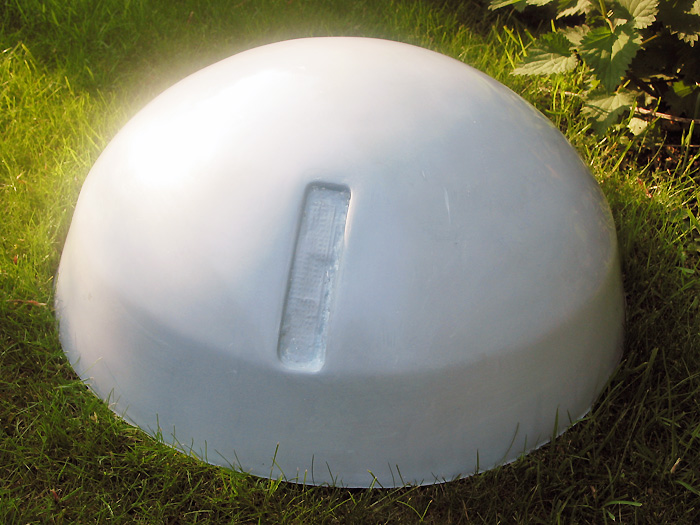 The original dome design was used on all Daleks built by Shawcraft during the 1960s. This design was also carried forward into the 1970s and 1980s. The bulk of Dalek props from these three decades have this type of dome. This includes TV and all movie Daleks. Made from fibreglass, the finished dome has a slot cut into it for the eyestalk, and holes drilled for the fixing of the dome lights.

The replica shown here is from a mould that has had a recess added as a guide, to show where the cut-out for the eye pivot should go. Builders often make their domes from scratch - see below.

Replacement domes were made during the late 1960s and 1970s by using an original as a 'plug' to create a mould, from which further castings could be pulled. 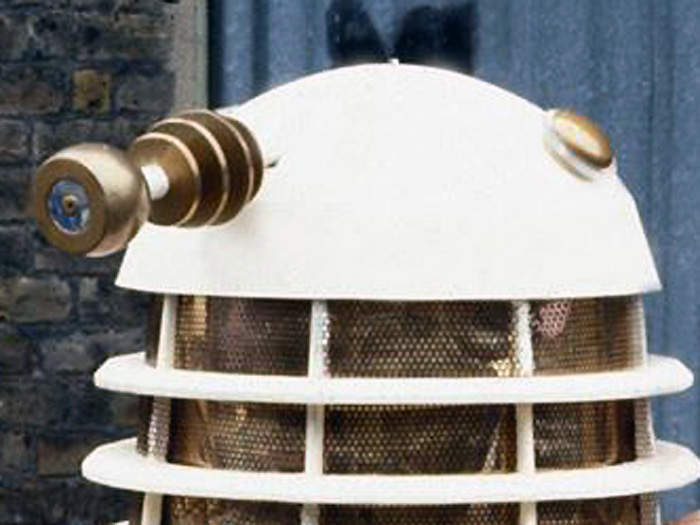 In the 1980s a brand-new batch of Daleks was built. The basic Dalek design was updated and one of the parts that were re-tooled was the dome. The new dome has a much more defined chamfer angle, where the curve meets the straight lower part of the dome surface. The new domes were made from fibreglass in exactly the same way as the originals, using a 'negative' mould.

The Imperial domes had a slightly larger diameter. Beyond that, they pretty much remained faithful to the original dome design used throughout the previous two decades. 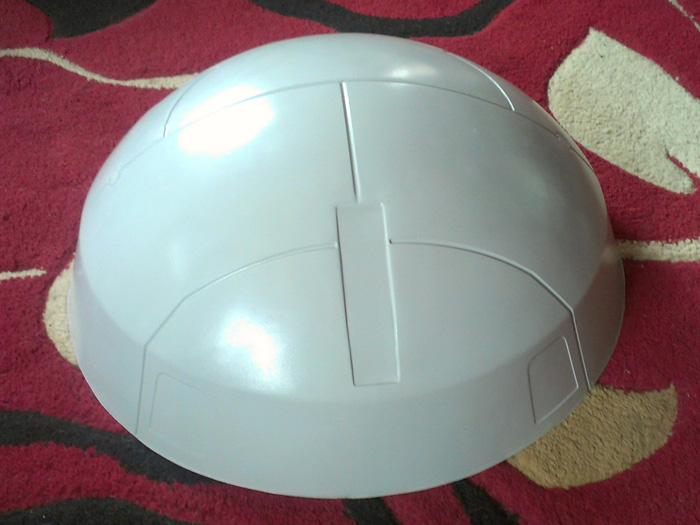 The latest dome design is a complete departure from the traditional smooth dome seen previously...

When the Dalek design had its makeover for the 2005 series, the dome was given quite a lot of extra detailing. It was augmented with a 'cowl' and had several grooves and recesses cut into its surface.

These additions were intended to 'beef up' the design and make the dome look more armour-like and interesting. The sharper chamfer line, seen on the Imperial domes, is also present on the New Series domes - the diameter is also very similar. The photo shows a replica dome before the cowl is added. The eye-slot recess is therefore clearly visible. 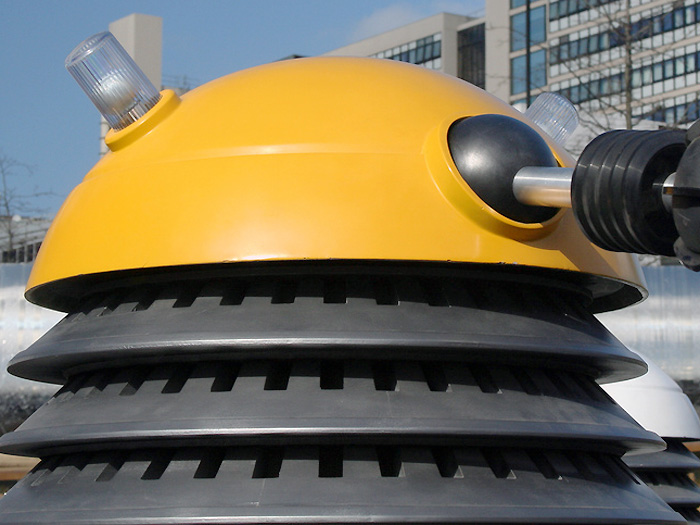 The dome design used on the re-designed Daleks is a complete departure from the original. It is, essentially a hemispherical shape, rather than a combination of curve and chamfer. A groove is used to define the position where the chamfer used to begin. As a result, the overall diameter is slightly bigger.

The slot for the eye-pivot is now a circular portal, sited much lower than on any previous Dalek, while the new integral 'plinths' for the dome lights retain the traditional dome light position. The unusual positioning of these items, in relation to each other, seems to throw off the symmetry and balance that is so familiar and present on all previous Dalek variants. 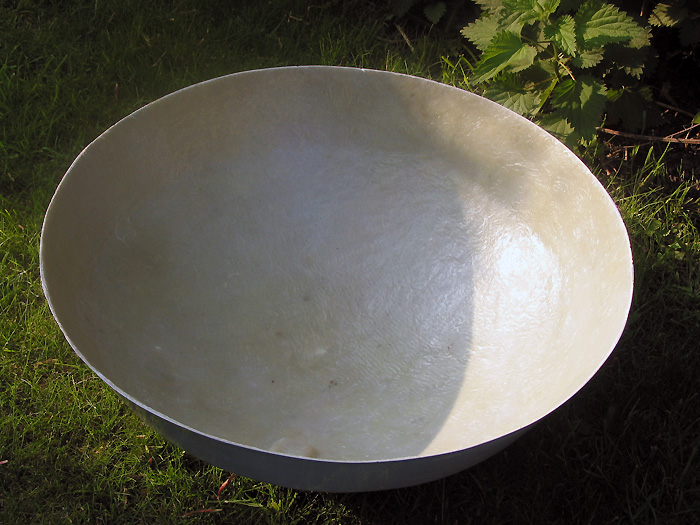 From the very first Daleks through to the present day, domes have been produced using the same method. A Dalek dome is made by adding fibreglass materials to a negative (female) mould. The photo on the right shows an upturned dome, freshly pulled from the mould. The inner surface clearly shows the glass fibre.

In order to make the dome turn and sit squarely on the neck, a circular wooden plate needs to be mounted inside, along the chamfer line. This plate is also used to mount the eyestalk pivot and its associated controls.

Ever wondered how a Dalek dome is made? There is a wealth of information on the Project Dalek Forum and in the Workshop Manual, but for those who want a quick 'getting started' guide, here's a rundown. Photos courtesy of Adam Strawson... 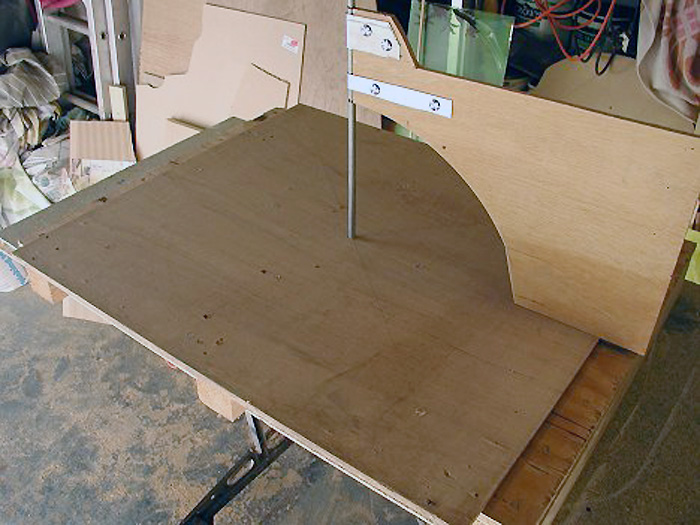 To make a dome from scratch, you need to first make a 'plug', from which the fibreglass mould can be made. This is done by tracing out the profile (cross-section) of half the dome onto a piece of board. The shape of the dome is then cut out, leaving a (loosely) L-shaped former. This is attached to a large baseboard using a sturdy steel bar. 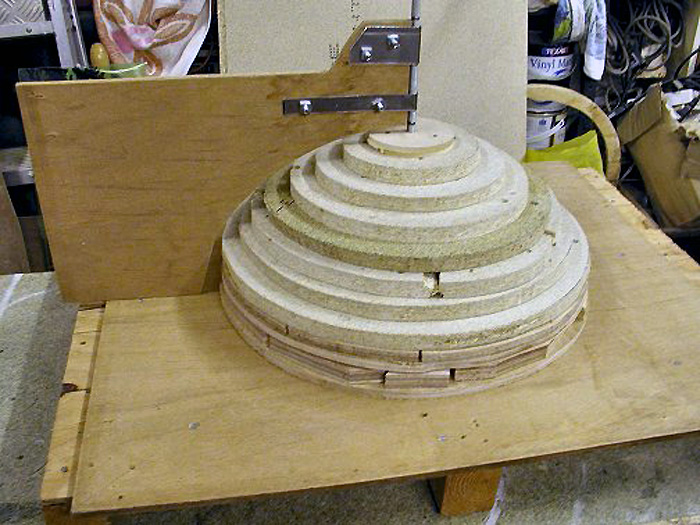 Any kind of cheap materials can be used to bulk out the shape of the dome, so long as they are to hand and easy to cut. Bits of wood or polystyrene blocks are ideal for this.

In the photo, we see the basic shape of the dome being built up below the former. Note that there is a continuous gap, all the way around, between the surface of the packing and the profile of the former. It is this gap that is filled with the plaster during the next phase of dome construction. It is essential that the former is completely free to turn without catching on anything. 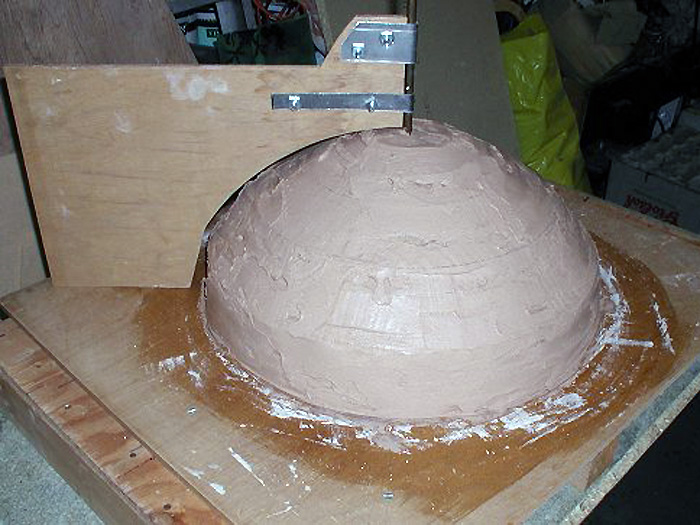 During this stage, the plaster is mixed with water and stirred until it reaches a thick creamy consistency. It is then applied to the packing materials, all the way around. The basic dome shape is carefully built up by hand.

More plaster is added and then the former board is rotated. This smooths off the outer surface and removes any excess plaster. With a little effort, a very smooth surface can be built up, as the plaster dries.

The former is then removed and the central steel bar is cut off, flush with the top of the dome plug. 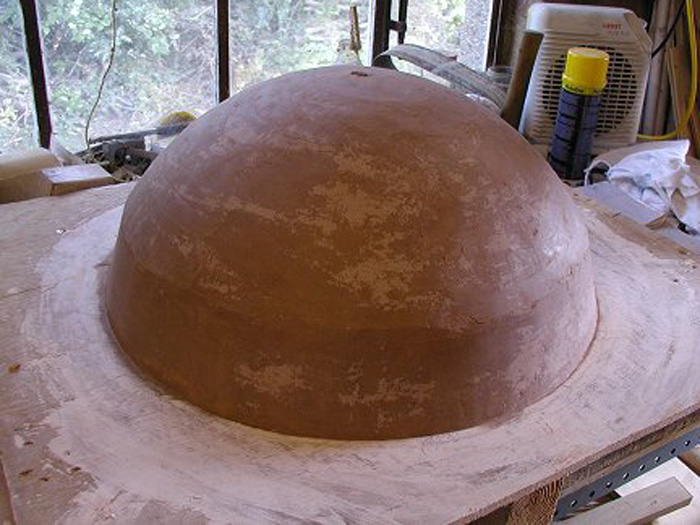 The surface can be lightly sanded and imperfections filled. Then, the plug must be left to dry thoroughly before any further work can be done.

The dome plug is set aside, preferably in a warm dry place, while the plaster dries out. The drying process should not be rushed by heating, as this may cause cracking, which will set the project back by many hours. Any imperfections that could not be corrected while the plaster was wet should be left until the surface is durable. Small amounts of filler can then be used to fix any problems. 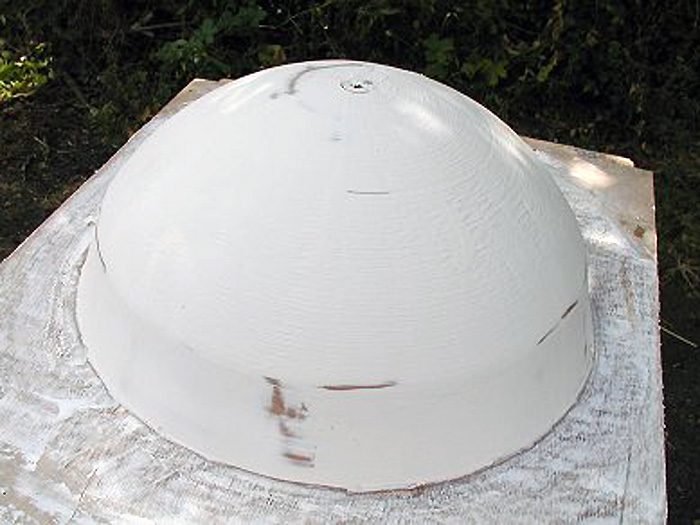 When the plaster is completely dry and free from rough spots, pitting and bumps, it should be sealed ready for creating the mould. This is often done using G4 sealer. Used to seal concrete ponds so the water doesn't seep away, G4 is an ideal product for this purpose.

Other sealers have also been used, but it is advisable to stay away from paints, as they can react badly to the gel coat resin that will be applied during the production of the mould. The photo shows a dome plug that has been sanded and sealed with great care. The final surface must be as perfect as possible as any defects will transfer directly to the mould and therefore, also to the finished dome. 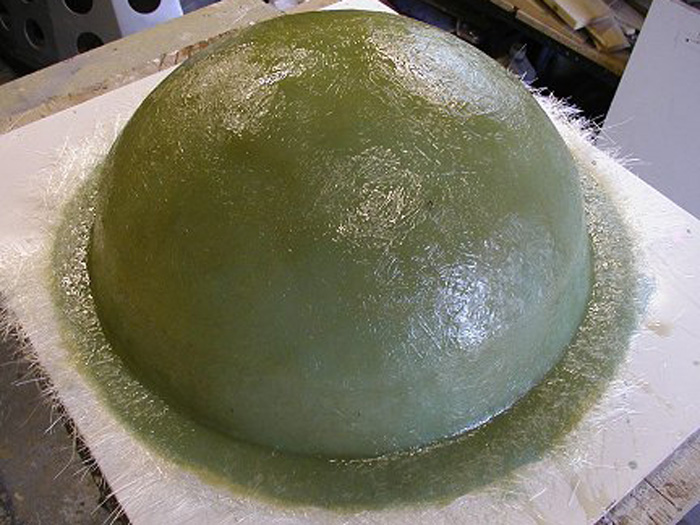 When the dome plug is complete, it should be thoroughly waxed with a good mould release wax. PVA release agent can also be used if desired. This will help to release the mould from the plug later on.

A layer of polyester gel coat is added over the whole surface of the 'plug'. Then, once it has become tacky, standard polyester resin is used to add layers of fibreglass matting. The matting is carefully dabbed down into place making sure that all air bubbles are removed from between the layers. In this example, the gel coat is blue, though it is hidden below the layers of glass matting. 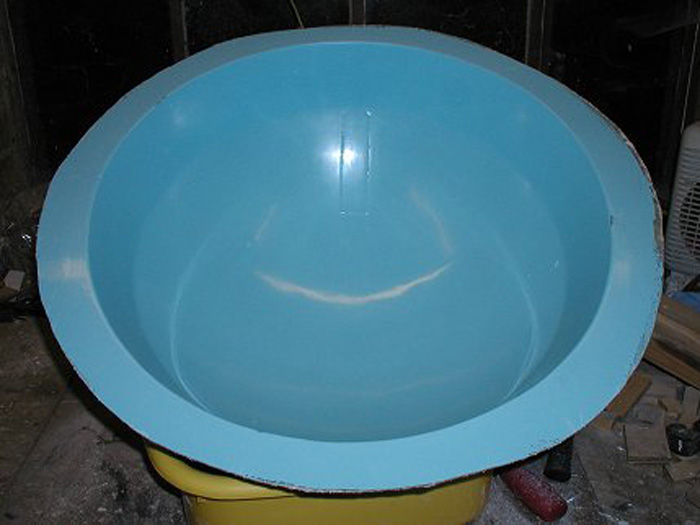 Once the fibreglass is completely cured, the dome plug and mould are carefully separated from each other. At this stage, the plaster plug can be discarded as it is no longer needed. The mould is washed and polished. Any accidental imperfections should be removed at this stage using polishing and cutting compounds.

It is essential that the surface is smooth and as near perfect as possible. Now layers of release wax need to be polished onto the mould surface. This stage should never be skipped or rushed as poor waxing can result in the dome getting stuck firmly in the mould. 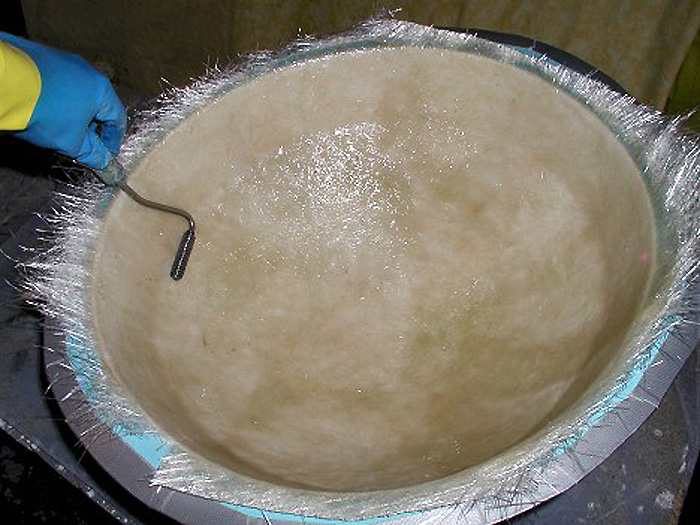 Once again, polyester gel coat, lay-up resin and fibreglass matting are used - this time to create the actual dome. Air bubbles are removed by dabbing the surface of the matting with a brush. A small steel roller is also used to press the layers of matting together and consolidate them into one single continuous, bubble-free layer.

When the lay-up is finished and it has started to cure, the edge can be trimmed off, if desired. This should be done with a sharp knife when the matting has a 'leathery' feel. It is easier to trim sooner rather than later when the resin has cured completely. 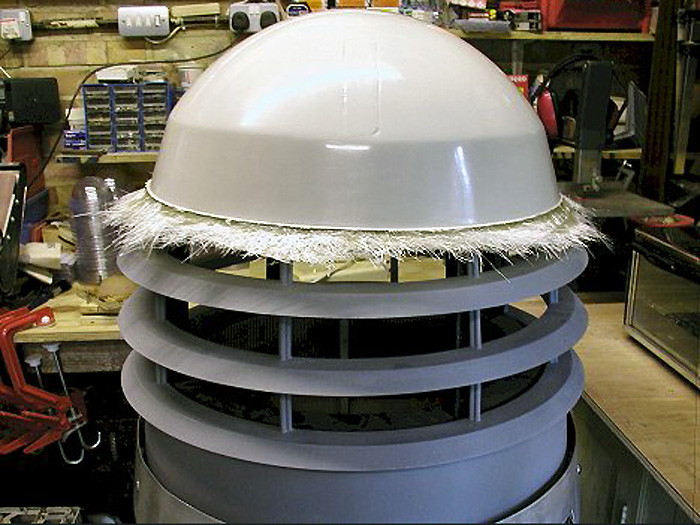 The dome is finally removed from the mould. In this example it still has its untrimmed edge, showing where the matting was laid up into the mould. The smooth grey surface is the polyester gel coat which was brushed onto the surface of the mould prior to the addition of the matting.

The dome is incredibly strong, due to its shape and the materials used. The dome can now be either polished and left in its natural gel coat colour or lightly keyed with wet-n-dry sandpaper before being painted in your chosen 'Daleky' colour.