The eyestalk kept the same basic design throughout the 1960s. Although there were changes to the discs, the pivot and to the length of the stalk, the basic idea remained the same. 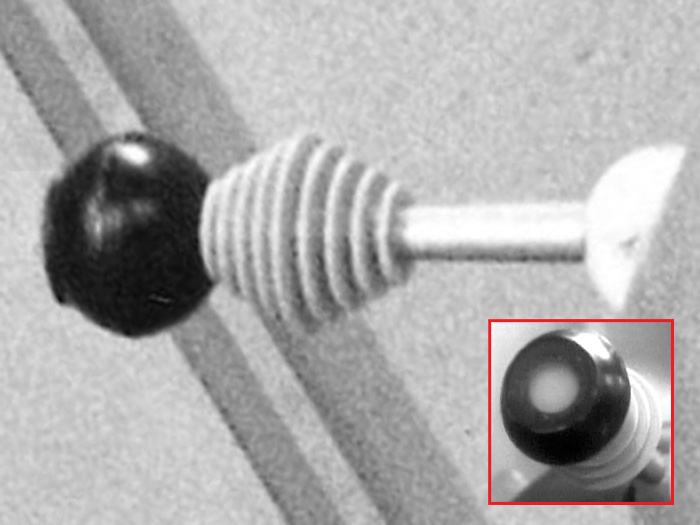 The eyestalks on the original Dead Planet Daleks were unique in having nine Perspex discs behind the eyeball. Later Daleks changed to five discs, which became the norm throughout the rest of the 60s and into the 70s.

One of the original eyes had a working iris that was used for close-up shots of the Dalek, giving a more animated appearance to the prop. This feature was also used to good effect in the first Dalek movie. The 60s eyestalks feature a distinct taper to the central tube - something which was lost during later refurbishment.

Early 1960s Daleks had eye pivots which were circular in profile. Later, the front most section of the pivot, (where the eyestalk is fitted), was cut to form a flat surface. 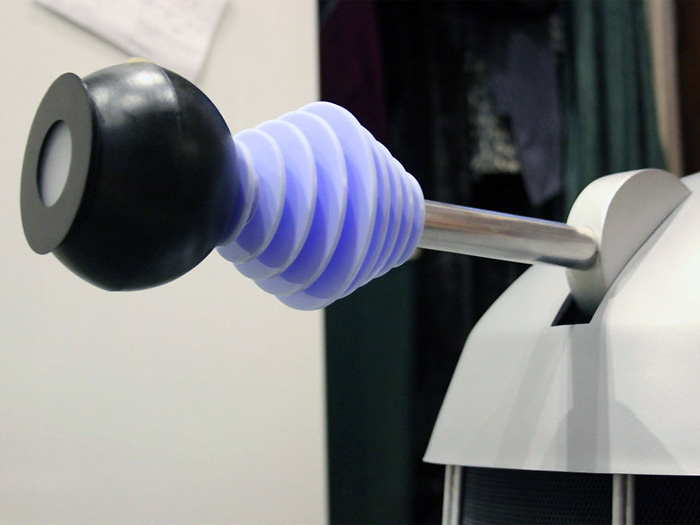 The picture shows a replica of the early, nine-disc version of the eyestalk. Some concessions have been made to the design of this reproduction. Most notably, the central stalk is not tapered but simply a section of straight aluminium tube. Locating suitable tapered tubing can be difficult.

Perspex of the correct colour for the discs is also almost impossible to find. Fortunately, Project Dalek has had a batch re-manufactured. This is available to everyone, via the Project Dalek Forum. The material is semi-translucent and produces interesting areas of darker and lighter colour which is difficult to reproduce using paint.

By The Dalek Invasion Of Earth, the eyestalks had lost four of their discs and were standardised with a five-disc configuration. At this point, some of the eyeballs changed from black to silver, while the stalk changed to black - just to keep things interesting! 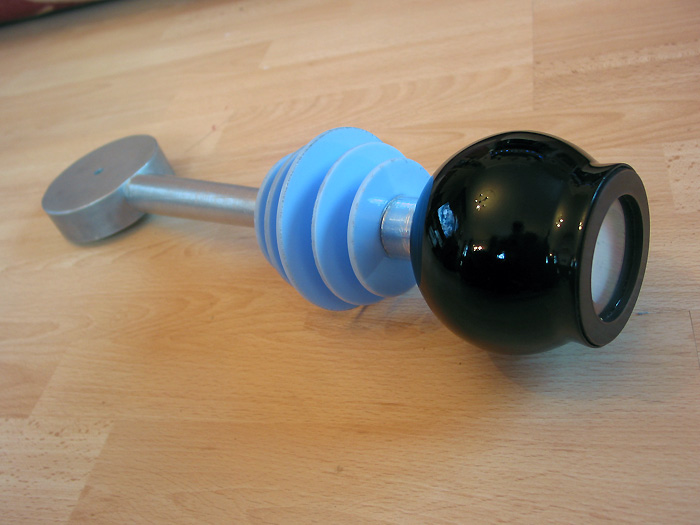 This photo shows a replica of a later 1960s-style eyestalk with the five-disc configuration. Here, the taper of the central tube has been recreated with suitable tubing. Eyestalks are often assembled on a length of threaded 'lamp rod' that runs through the centre from the eyeball to the rear of the pivot. The various components are threaded onto the rod, including short sections of the outer tube.

Once assembled this gives the impression that the outer tube is one continuous piece. Wires are fed through from the light in the eyeball to the rear of the pivot, where they can be connected to a power source when the eyestalk has been fitted to the dome.

For the rest of the 1960s, the basic configuration remained the same, though continuous breakage and repairs to the eyestalks meant that some appeared with odd disc configurations and longer/shorter stalks etc. 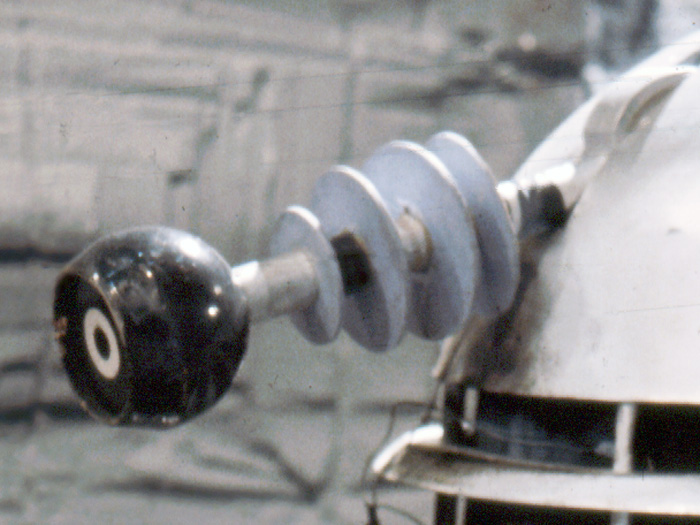 The basic five-disc configuration was retained, but some Daleks began to lose whole discs or parts as damage occurred. The pivots adopted the flat face configuration mentioned above. Many of the early 1970s eyestalks were simply refurbished versions from the 1960s.

The most notable change to the eyestalk was the addition of a black pupil to the eyeball. Although there is a brief appearance of a Dalek with this feature in Evil Of The Daleks, the pupil wasn't adopted as standard until the 1970s. From this point onward, the design begins to vary considerably. The discs on new and refurbished eyestalks seem to be attached in no particular size order.

Some later eyestalks have discs of a brighter blue, being either painted or made from Perspex from a more modern production run. By the end of the 1970s, most of the eyestalks were on their last legs (so to speak!). 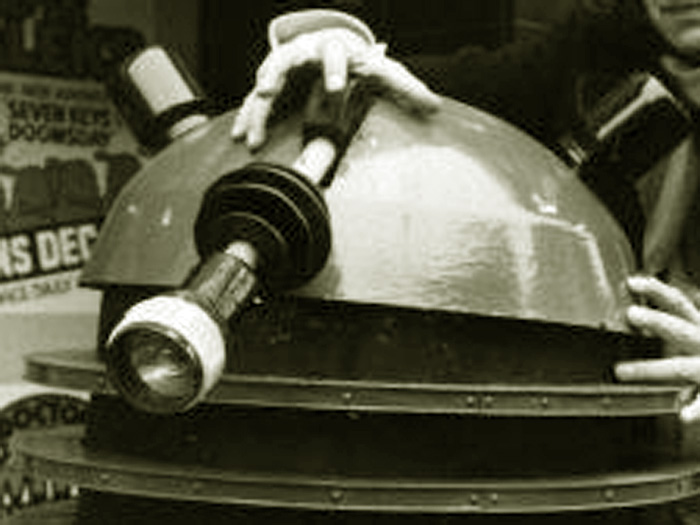 By far the strangest eyestalk ever fitted to a Dalek was the one given to the Supreme Dalek in the story, Planet Of The Daleks. It was made from an Eveready torch, combined with various other bits and pieces. It is possible that the converted movie prop (on loan from Terry Nation) did not have an eyestalk, or the original was damaged beyond repair.

Many of the 'upgrades' to the props during this period borrow items from the mundane 'real world' and this eyestalk is possibly the worst example. No attempt was made to cover up the 'torchiness' of the item. This 'eyeball' is the only one in Dalek history that flashed on and off in time with the dome lights, as the Dalek spoke - wonderful. 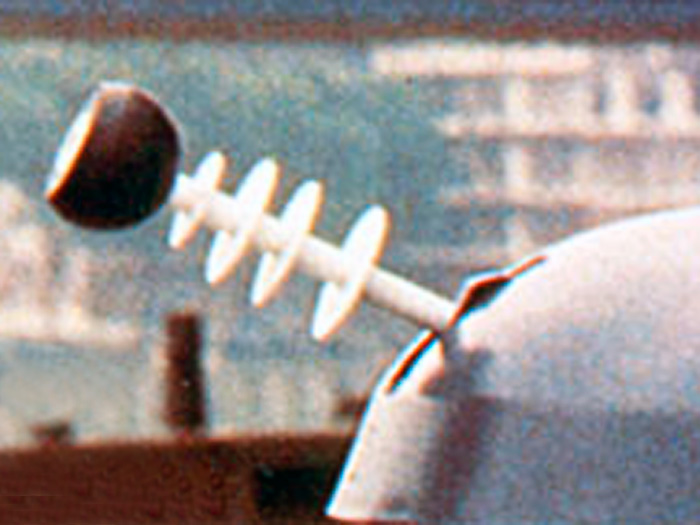 By Revelation Of The Daleks, the original eyestalks and the 70s replacements had just about fallen apart. Here we see the introduction of a brand-new black-and-white design.

The replacement eyestalks on the standard and 'Renegade' Daleks of the 1980s all follow the same basic design. They have a cropped eyeball that is only slightly wider in diameter than a hemisphere and has a chamfered front. The discs and tube are in white, with much wider and more open spacing to the discs than on most Daleks seen previously. The pivot has the, by now, well established flat front.

The iris design retains the pupil, but the overall look of these eyestalks is massively simplified compared to the original versions produced in the 60s. 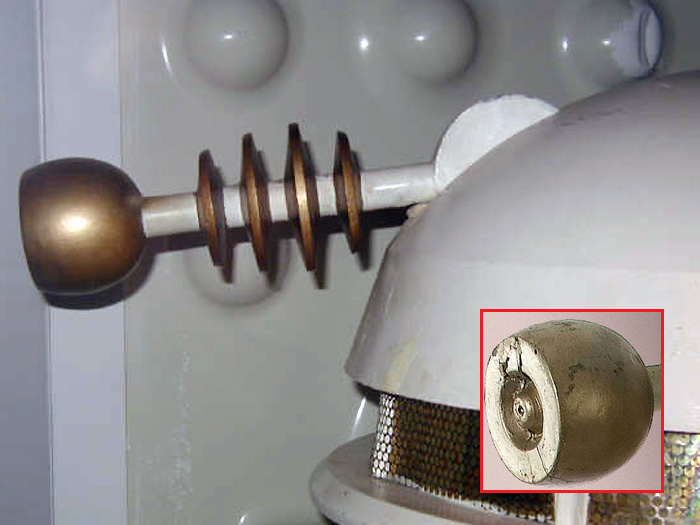 The next big change was the introduction of the Imperial Daleks with their newly redesigned eye stalks finished in bronze.

The Imperial Dalek eyestalk sported much thicker discs than any previously used. They were chamfered towards the edge, so they appear to be slimmer than they actually are. This is an optical illusion that has fooled many Dalek builders, prompting them to make replicas that somehow don't look quite right.

The eyeball is slightly elongated, compared with the Renegades, and has an iris which looks more like a blob with a pinhole in it than something that a creature could actually see-through. Thankfully the eyestalks on the Imperials were all standardised, with little or no variation - for the first time since the early 1960s. 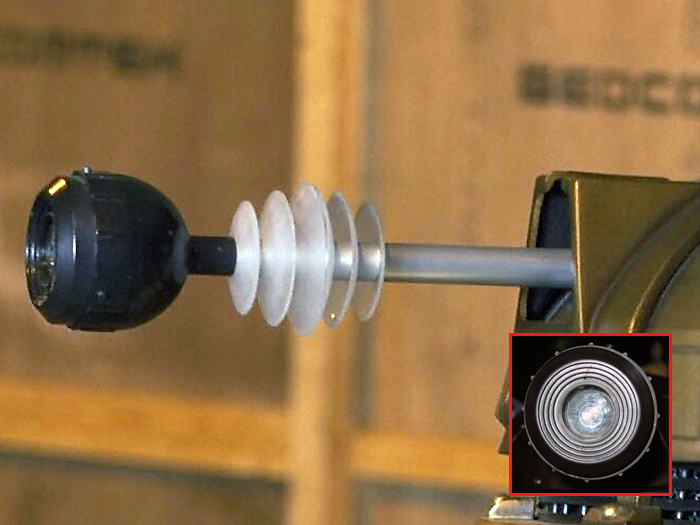 This version of the Dalek eyestalk uses elements borrowed from all three previous Dalek eras. We see a return of the operational iris, and the illuminated eyeball - not seen since the 1960s (not counting the Planet Supreme). We also see the return of the ordered rounded-profile eye disc group - achieved using eye discs of varying diameters. The discs are dished for the first time.

The bulk of the parts used to build this version of the eyestalk are from EMA. The parts are mounted on a central tube that is slightly thinner than the outer eyestalk tube. The discs and various spacers are slid into position, then the final rear length of outer tube is added.

Due to the addition of the cowl to the dome design, the eyestalk and pivot are separate, detachable pieces. This makes it easier to remove the eyestalk. The iris design varies between props. There are motorised versions and basic illuminated versions. Consequently, the number of steps in the iris surround can vary from eyeball to eyeball. 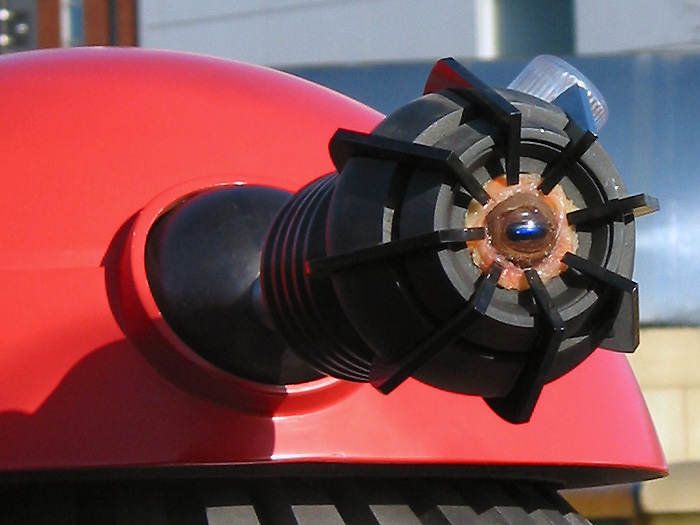 The latest version of the eyestalk uses a ball joint as the eyestalk pivot, rather than the standard flat solution, used up until this point. Despite its looks, this pivot only moves up and down, there is no side-to-side or free movement. Being as sideways movement is achieved by turning the dome, this is understandable but does mean that the ball joint is a little pointless.

The eyestalks on the redesigned Daleks seem to be a design progression from the earlier 2005 eyestalks. The eyeball is elongated and the ridges (seen previously) have become extended into fins. The discs are flat, rather than curved with a slight chamfer to the edge. They share a uniform diameter which is much smaller than the diameter of the eyeball. This is partly because the discs are smaller than the largest of the previous discs and partly because the eyeball is much bigger than a normal Dalek eye. The iris is designed to look organic. This is achieved by using a false 'fallow deer' eye at its centre, as used by taxidermists.