The gun is situated on the left-hand side of the Dalek. It is an icon in its own right. The design has evolved slightly over the years but any standard gun, from any era, is clearly recognizable as being from a Dalek. 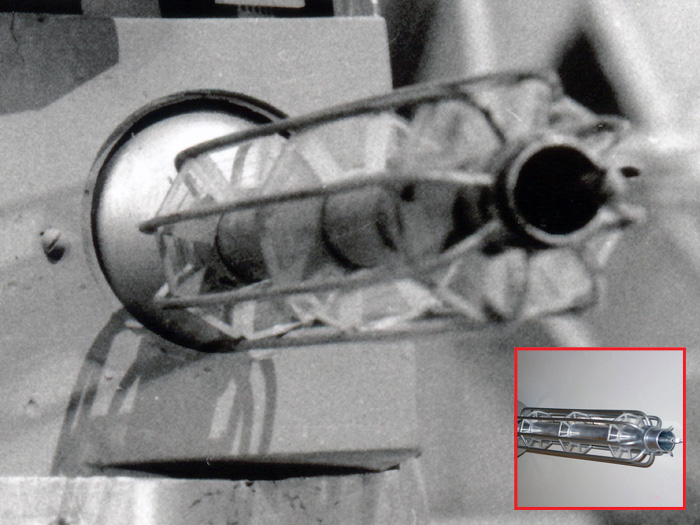 The very first TV guns set the standard for almost all Dalek weaponry that followed. They were built from a central aluminium tube surrounded by eight lengths of rod, bent at the front and rear. Threaded onto the tube, underneath the rods, were three pieces of octagonal Perspex.

These had a thin border and spokes painted onto them in silver. Replica versions are still made in exactly the same way today, though epoxy resin is often used to attach the rods, rather than the brazing or welding that was used on the originals.

The central 'exterminator' part consisted of a metal rod that had a series of thin metal 'leaves' attached to it. These open up like petals when the rod is extended out of the end of the barrel. 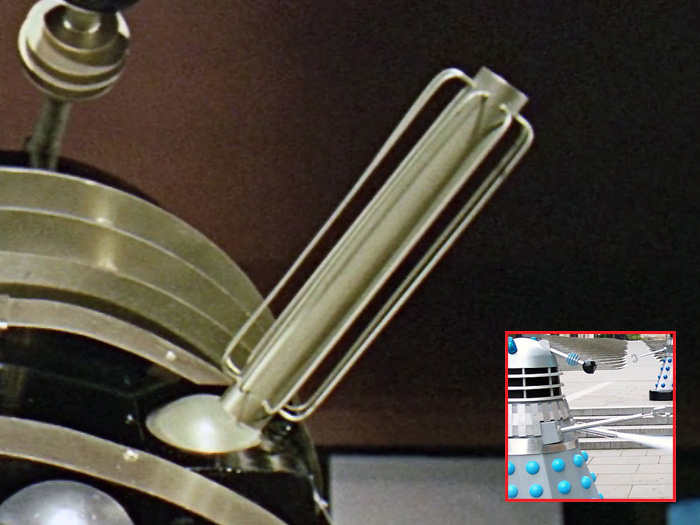 The guns made for both Dalek movies were of a very similar design to the TV versions. However, they vary in three main ways: Firstly, the inner tube is of a slightly bigger diameter. Secondly, the plastic octagons seen on the early TV props were not used. Thirdly, there is no internal firing mechanism, just a plain hollow tube.

The tube diameter was increased and the central mechanism removed in order to facilitate the addition of carbon dioxide (Co2) as a visual effect when the gun was fired. Clouds of white gas were pumped through the tube during 'exterminations'. The effect is enhanced by the amount of gas able to travel through the larger-bore, unrestricted tube. 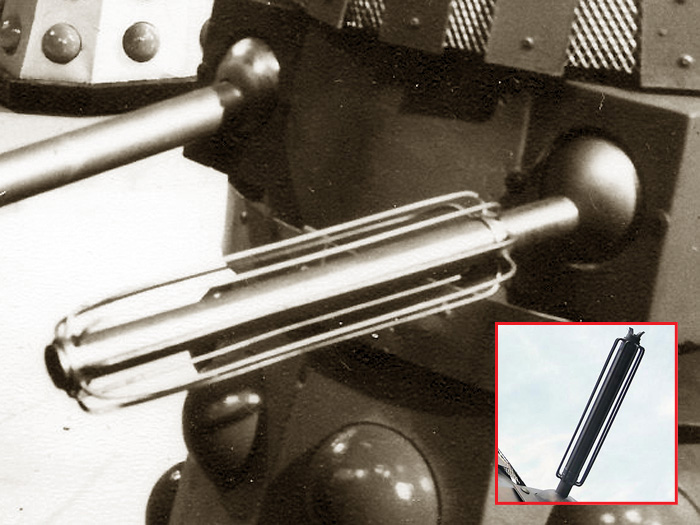 By 1966 the TV Dalek guns were undergoing replacement and refurbishment. At this point the three octagonal plastic discs were dropped from the design, making the TV guns look like slimmed-down versions of the movie guns. The inner firing mechanism was retained.

This modification could have been prompted by the filtering through of movie props and parts into the TV series. There would have been an effort to keep all available props looking as similar as possible for continuity purposes. 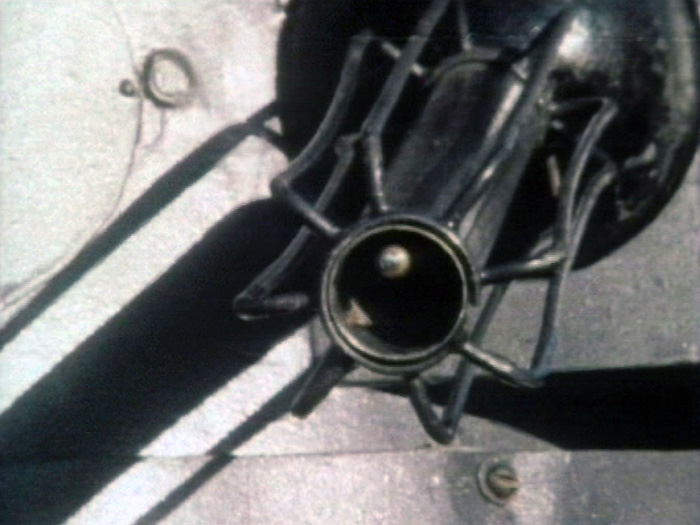 The later 1960s guns were used right through the 1970s with no change to the basic design. The only significant cosmetic change was to the colour. Most of the guns from this period tend to be black. Once again, this may have been an attempt to cover up the fact that they were suffering from a good amount of wear and tear.

Most of the guns from the 1970s have a distinctive 'crimped' look. The rods are bent inwards towards the centre of the gun. This has happened due to the continuous handling of the props. The guns were used as 'handles' for pushing and pulling the props around. Some builders actually re-create this look when building 1970s Daleks. 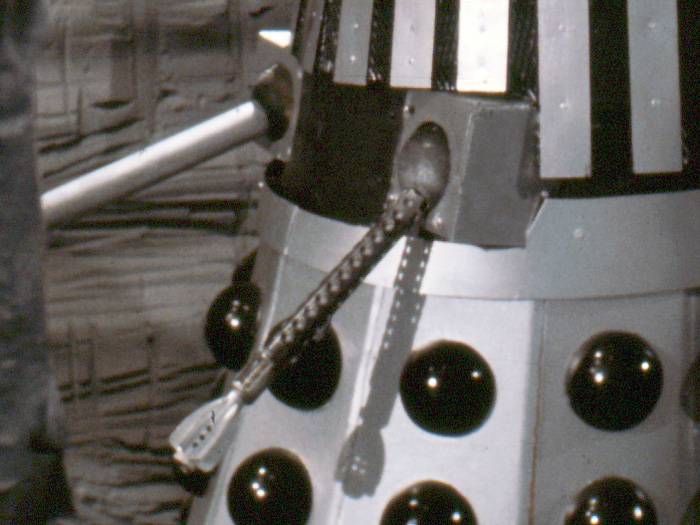 The biggest departure in Dalek gun design came during the story Death To The Daleks. The plot required the Daleks to be fitted with replacement guns that fired bullets rather than a death ray. This unique gun design only appears in this story. It resembles the barrel of a machine gun. Longer than the standard gun, it has a series of holes drilled into the barrel sides.

It is topped off with the tail fin from a mortar shell, giving the 'business end' a dangerous military look. On-screen, the guns actually do appear to fire something, though it is unclear what it is. It is highly likely that compressed air was used to achieve the effect. 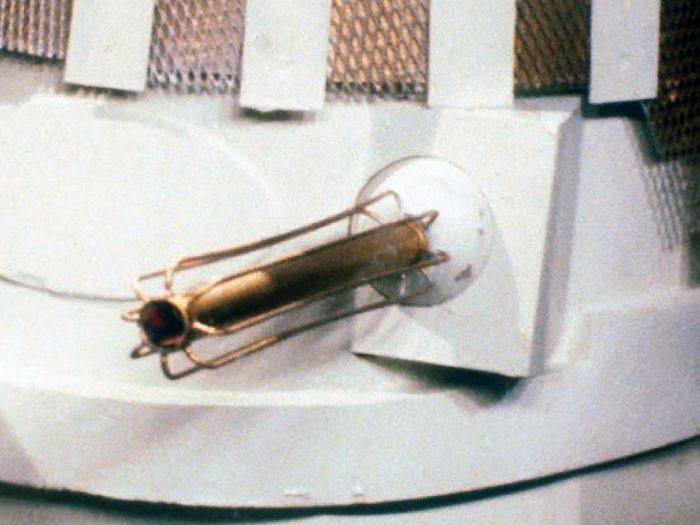 Many of the battered guns from the 1970s also appear in the 1980s. Additionally, new guns were made for the Renegade and Imperial Daleks. These follow the classic design but vary slightly in the width of the rods used and the angle/diameter of the rod curves.

The most notable change was the introduction of a new gun colour, on the Imperial Daleks. Sporting the traditional eight rods, these guns were painted in 'Antique Gold' and were slightly more open than the original guns. Note the very small amount of space left between the tip and the start of the rods. 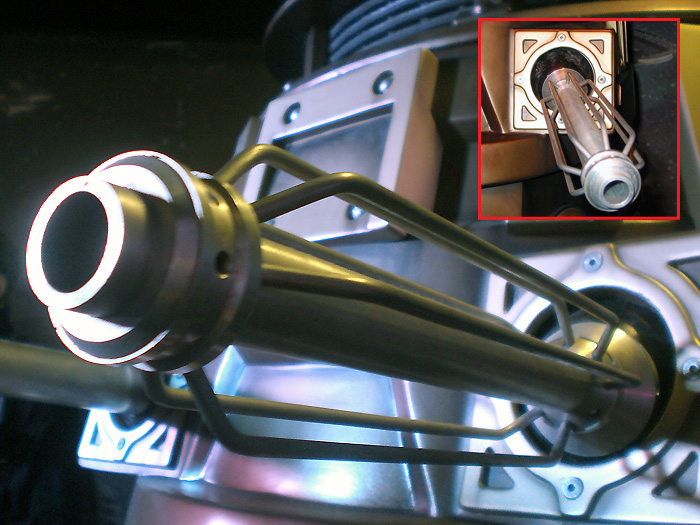 The 2005 version of the gun is very similar to those that came before it. It still has the central barrel and eight surrounding rods. The main difference is the addition of bezels where the rods join the barrel. Two machined aluminium collars have been added, filling out the overall look of the gun, making it seem more alien and dangerous.

The eight rods (thicker than on previous guns) give the gun an angular look and no longer bend in a gradual curve. Instead, the rods have two definite bends. There is no internal firing mechanism on these guns. All the new guns are practically identical with the exception of the damaged gun seen in the 2005 episode Dalek. 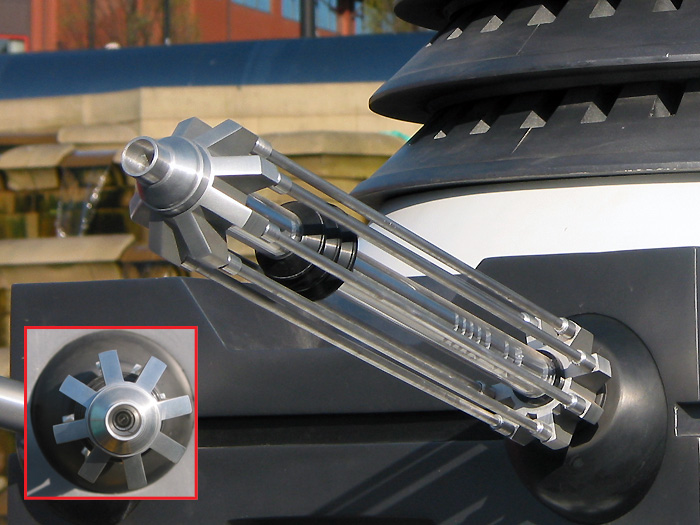 The guns on the five re-designed Daleks are completely new constructions. They are much longer than the standard Dalek guns and are made up of many more components. The central tube (rod) has groove detailing cut into its surface and is encased within a clear plastic tube. Black disks have been added, near the front of the barrel. These match the eye disks.

The outer rods now have extra detailing on their ends. They are mounted into heavy-duty aluminium bezels, front and rear. The look is completed with the addition of a turned, nozzle like barrel end which has a much smaller opening than any previous Dalek gun.