The neck section has retained the same basic ideas throughout the evolution of Dalek design. It is made up from an internal frame or 'neck bin', three rings and eight struts. The number of struts and rings has never changed on the (standard) Dalek props, from the first batch right through to present day. 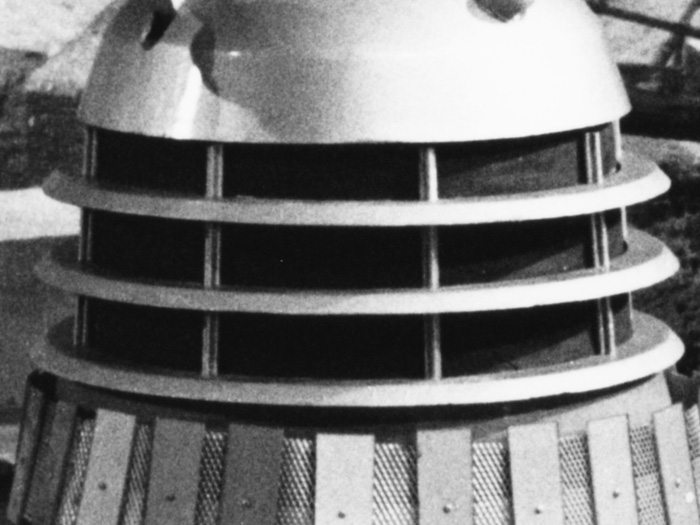 The picture shows an original neck section built in the 1960s. The eight struts are made of a wooden moulding, with a trefoil cross-section - like a cloverleaf. This type of moulding is no longer commercially available, so builders wishing to copy this look have to improvise and glue three smaller dowels together to make each strut.

Struts were sometimes cut off flat at the top and were also occasionally cut at an angle. Also, note that the rings have a 45-degree angle on their edges, which progresses to a sharp point. 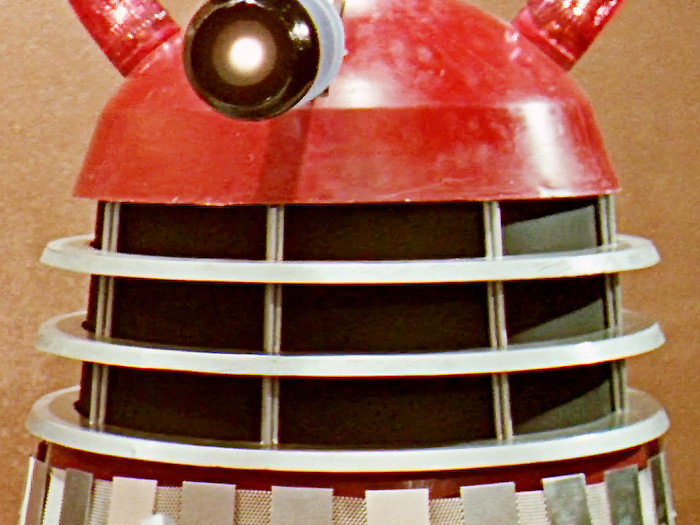 The neck sections on the movie Daleks were slightly different. Built using the same basic design and the same methods, they varied because of the difference in the angle of the outer chamfer of the three neck rings.

The chamfer is at a steeper angle than on the TV neck rings, but there is still a sharp edge. The mesh around the internal bin also seems to differ slightly. It is made of a material which has a much finer mesh, making it very difficult to see through from the outside, while still giving the Dalek operator good visibility.

By the 1970s, the original Dalek neck sections had seen a lot of wear and tear. Some refurbishments and replacements were carried out. 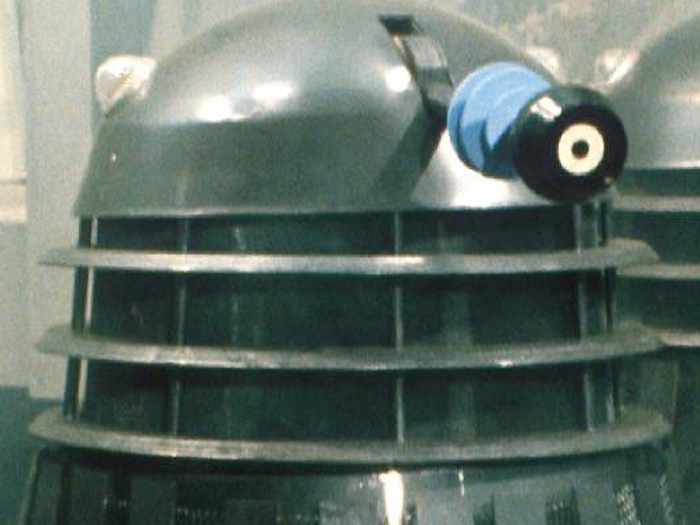 During the 1970s we see the Dalek neck sections becoming progressively tattier. The rings begin to tilt and the struts are often skewed at odd angles. It is during this decade that some necks were refurbished or replaced.

*The modified necks are easy to spot due to the use of standard round dowel for the neck struts. This was used as a replacement for the trefoil style seen on the originals. It is likely that by the late 1970s the trefoil material was no longer a stock item. TV and movie neck cages and neck bins also seem to have been mixed and matched creating some odd results. 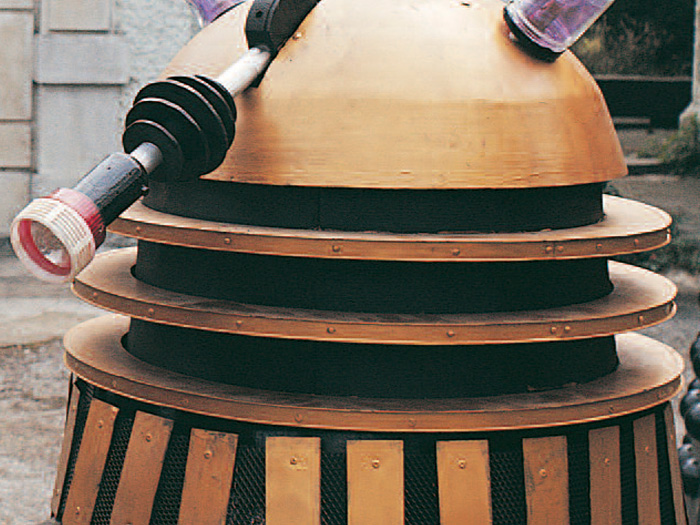 As always, the Planet Supreme for The Planet Of The Daleks is the exception to the norm. It sported a neck section which was completely redesigned. It was the only screen-used Dalek ever to have a neck with no visible struts. The rings appear to have been fixed directly to the internal bin.

The rings were almost identical in diameter and had vertical edges that were covered with a plastic moulding material, pinned or screwed into position, before being painted gold. The overall look was at odds with most people's idea of the Dalek design. A true 'one-of'. 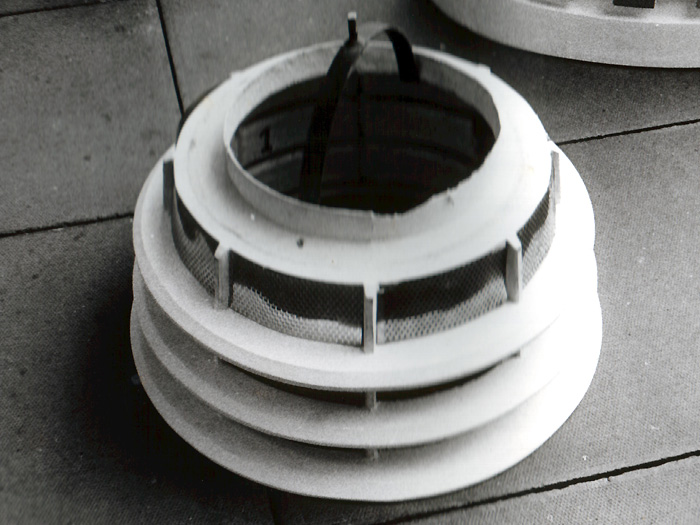 The Imperial Daleks had neck sections that were built entirely from fibreglass. The picture shows an example with the dome removed. Note that the rings, bin and struts are all part of a single moulding. There are no 'gaps' between the rings. At the front, where the operator looks out, three holes have been cut between the rings. The gaps have then been covered (externally) with gold reflective material.

For the first time, the neck rings do not chamfer to a sharp edge. They are blunted slightly and have a small vertical 'flat' along their outer edges. Because there is no bin top, an A-frame is used to support the dome.

The return of the Daleks in 2005 saw a revamp of the neck design, retaining some traditional aspects, while also adding some new elements. 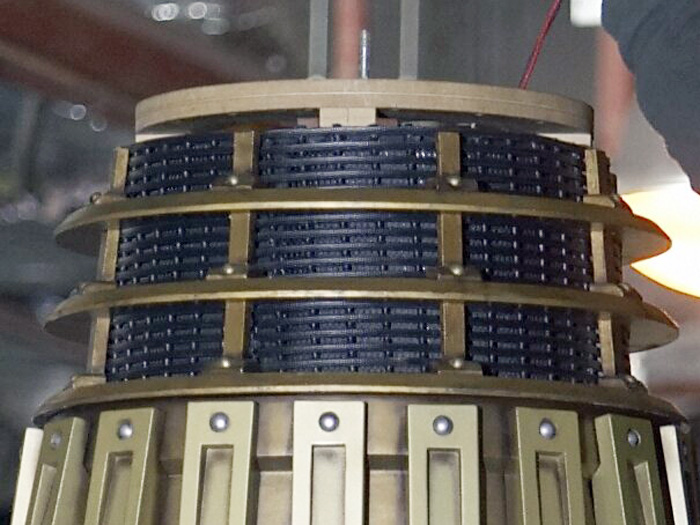 The New Series Dalek neck has the same basic design as the original 1960s Daleks, though the diameters do differ slightly. It also has the blunted neck ring edges of the Imperial Daleks. It is comprised of two separate units: a cage and a bin. The struts are no longer rounded but are squared off. A small 'neck block' detail has been added at each point where the rings and struts intersect.

The mesh, through which the operator can see, has been replaced with a chunky material - anti-slip swimming-pool matting. The overall look is a combination of Classic and Imperial Dalek design, with a modern 'twist'. 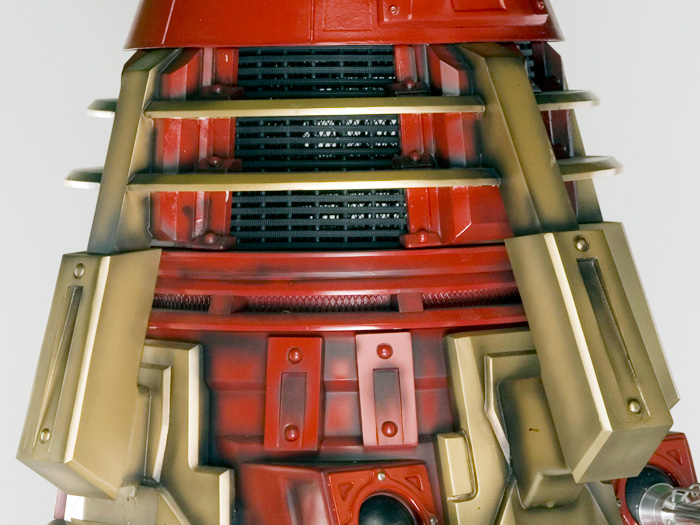 The neck section built for the red Dalek Supreme, (seen in The Stolen Earth and Journey's End, 2008) is a completely new design. The main neck cage assembly is built as a separate unit which locates in slots. The gold neck rings are larger than usual and unique to this Dalek. The clamps which rise up from the shoulders are modular, with the top parts being integral to the neck cage, the bottom edges slot into the tops of the larger clamp sections.

Visibility for the operator must be poor as much of the view is obscured by the frontal clamp and associated neck furniture.

With the re-design, for the 2010 series, the neck section gained a fourth ring and completely lost its struts. This unusual construction is made almost entirely from thick layers of CNC cut MDF. The shape suggests to the observer that it might be collapsible (or maybe springy). Ultimately, it is just... unusual. 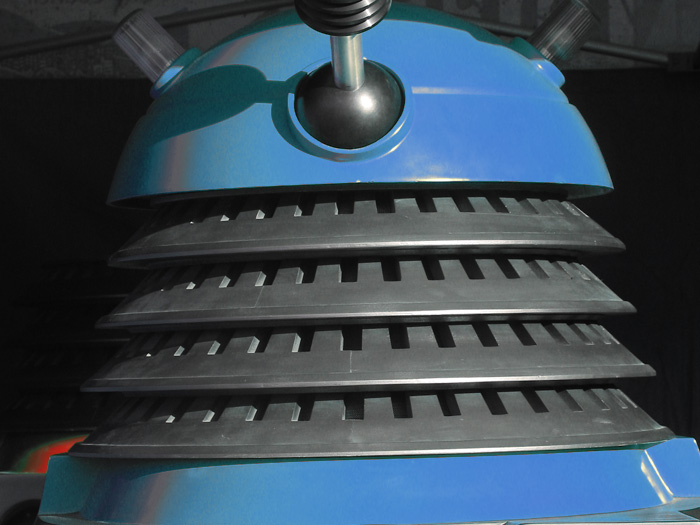 The new neck rings extend up and are attached to the ring above, with thinner, intermediate rings or disks in between. The operator sees out through the slots cut into the upper portion of each ring, though due to the height of these Daleks, only the slots in the lower rings are of much use to all but the tallest operators.

There is no separate, interior 'bin' construction. The rings are fixed together into one solid (and quite heavy) unit, with the plinth which supports the dome's wheels being part of the upper ring. The slots are backed with fine silver mesh, attached in strips. The inside surface is lined with pipe lagging to shield the operator's face from potentially sharp edges.

Let's find out how a Dalek neck section is made. These photos, courtesy of Alan Orchard, show the construction of a New Series Dalek neck. 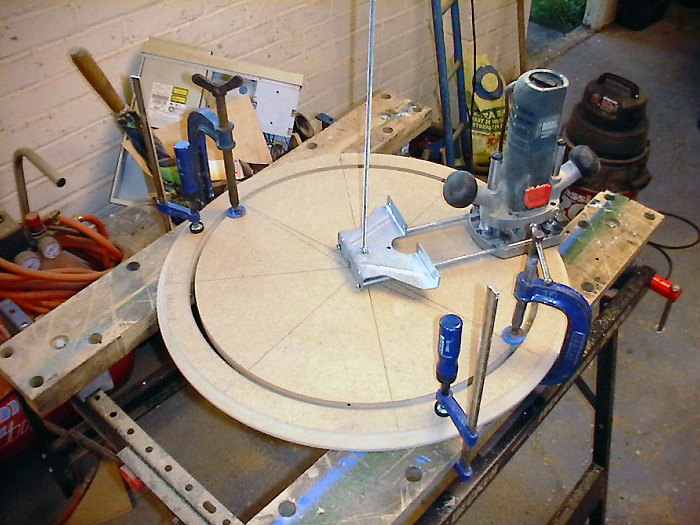 Sheets of MDF are cut down to the correct size and then mounted in a jig. A router is used to cut the outer chamfer to the desired angle. The router is attached to a central pivot point and rotated to achieve the final result. This is a very messy, dusty process. The use of a dust mask (and a vacuum cleaner) are absolutely essential.

In the photograph we see the inner 'core' of the neck ring being removed, leaving a thin hoop. This will become one of the three neck rings used to assemble the neck cage. 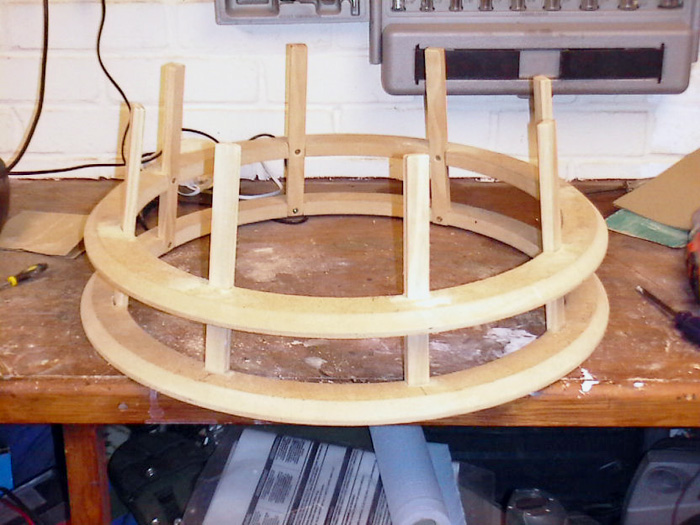 This photograph shows a partially assembled neck cage. The lower ring has had the struts attached. Then the middle ring has been fitted in place leaving the correct gap between the two rings. The third ring will be next. Again, great care will be taken to ensure that the spacing between the rings is correct, according to the chosen plans.

Once the cage has been assembled, the 24 small blocks will be added where the rings and struts meet. These give the new series Dalek neck cage it's distinctive 'chunky' look. Some builders dispense with the neck bin and fix a top to the cage for dome support. However, this example a neck bin is being built separately. 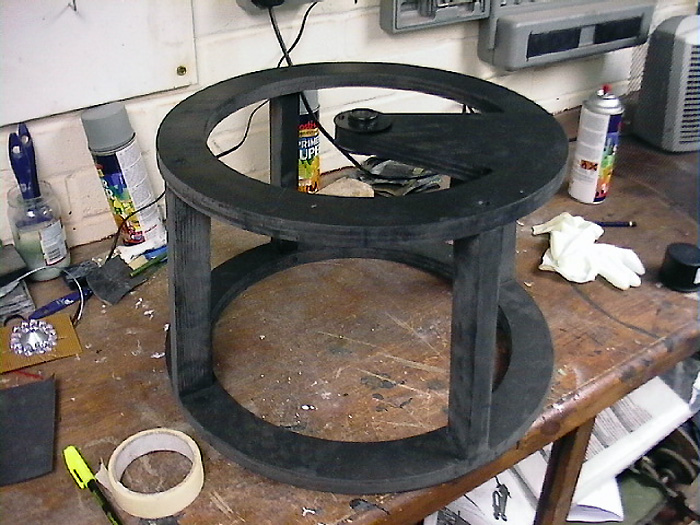 This is the bare neck bin frame before the mesh/matting is added. The assembly has been painted black in order to make it blend in with the black of the matting when the neck is assembled.

Note the cutout in the upper surface. This is where the controls for the eyestalk and dome will come through. The cutout gives the dome a near 360-degree rotation capability. The central point holds a small bearing which will be used to rotate the dome.

Often, small rubber wheels are also fitted into the upper edge to act as additional supports/bearings. The flat disc fitted into the underside of the dome will slot neatly onto the central pivot creating a turntable. 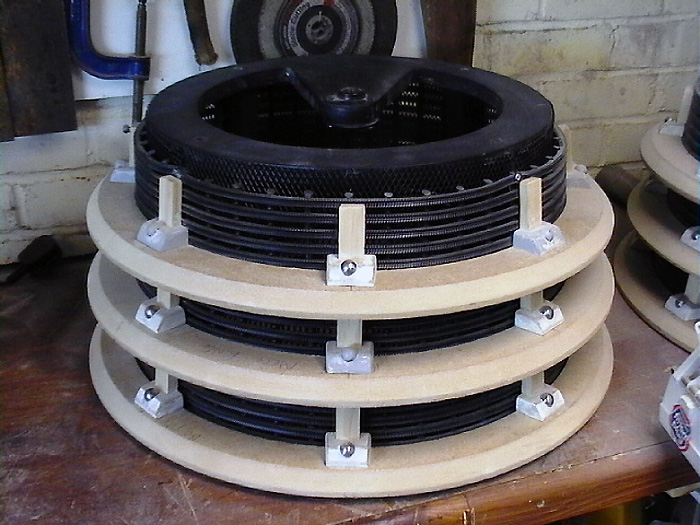 Here's the assembled neck section, showing the order in which the layers of materials have been added. The mesh (rubber matting in this case) has been wrapped around the neck bin but could be attached to the rear of the neck rings, if no bin was used.

The neck bin has been made to diameter, taking into account the thickness of the matting. It has been slotted inside the cage and temporarily fixed into position. The small detail 'neck blocks' have been fixed into position on the neck rings. All that remains now is for the wooden neck 'cage' components to be sprayed in the correct colour before the neck is re-assembled and the dome is fitted.