The shape of Daleks' shoulders has changed little over the years. Their basic design and size have remained fairly constant, though there have been some significant cosmetic alterations over the decades. 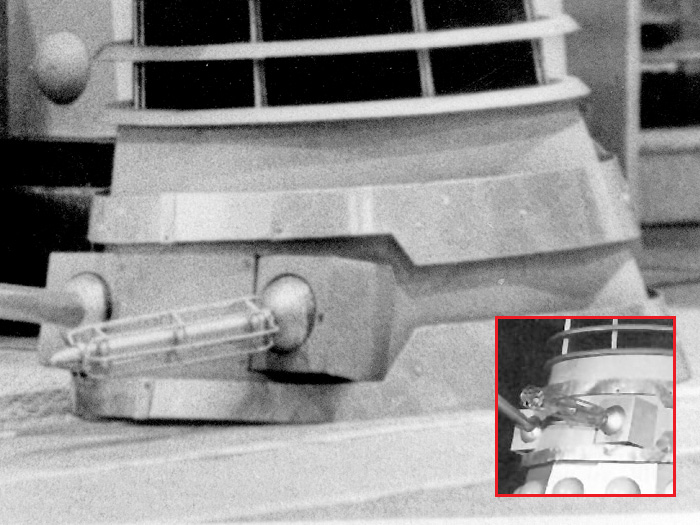 The original shoulders built in the early 1960s were of wood and fibreglass construction. The outer skin of the shoulders was built up in layers of fibreglass and then two holes were cut in the front. These holes were used to fit the gun and arm boxes, which were made of wood.

The wooden components were of a very basic design and in some cases had an open underside, where the TV cameras would never see. There is often an obvious join visible between the wooden inserts and the fibreglass body. 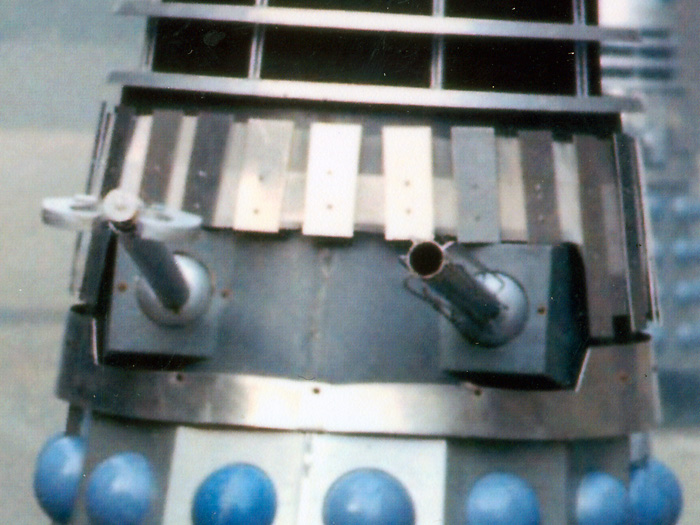 The movie Dalek shoulders were very similar in construction to the TV versions. The most significant difference was that the gun and arm boxes were also made from fibreglass. This change in construction materials also altered their look slightly. The boxes are less 'square' than the TV versions and have a more fitted look about them.

The fibreglass gun and arm boxes are complete boxes, with a solid front, side, upper and lower face. If photos are examined closely, a seam can be seen running down the front of the shoulders between the boxes. This is where the two halves of the shoulder mould were joined together. 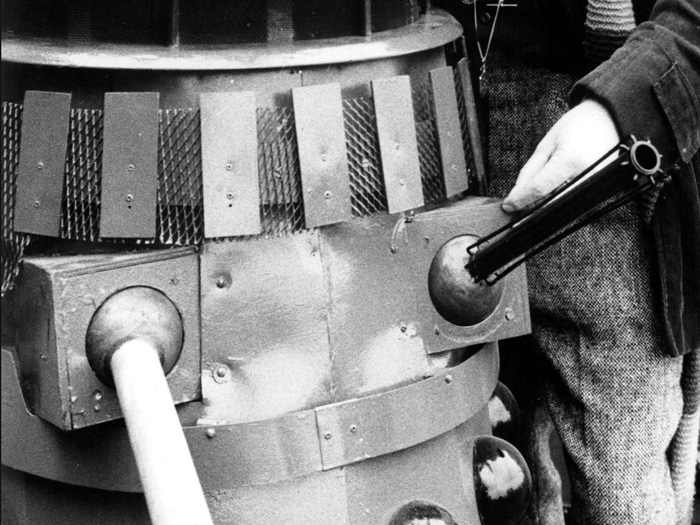 By the 1970s, both TV and movie shoulder sections were still being used on screen. As the rest of the Dalek parts were refurbished, so were the shoulders. Though more often than not, they were simply given a fresh coat of paint.

New shoulder sections were also constructed for use on props which were being made by the BBC to bulk out the number of Daleks seen together on screen. These shoulders appear to be made of steel or aluminium, wrapped around a wooden frame, complete with wooden gun and arm box inserts (see photo). 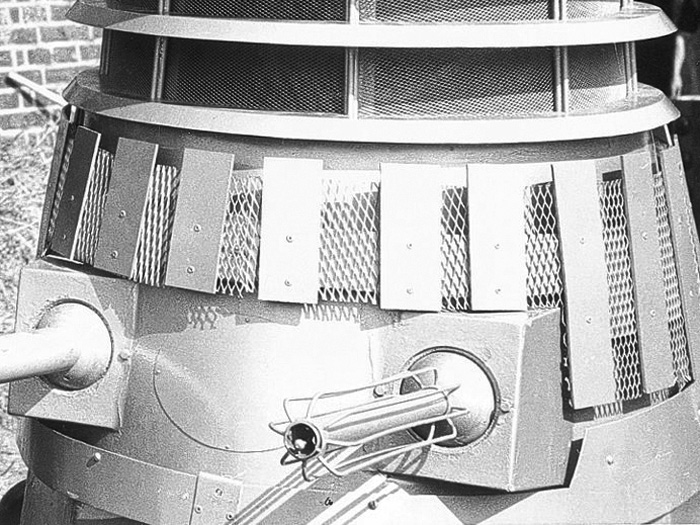 The most significant addition to the shoulder design in the 1970s was the oval plate added between the gun and arm boxes. It is unclear why this was done though it is likely that it was used to cover damage.

Many of the original shoulder sections became increasingly tatty. There is much evidence of repair work, mainly to the wooden sections and the seams between the shoulder halves, and the boxes, where large amounts of filler was used to smooth out the joins. Dark colours were often used to hide the state of the props. On Daleks painted in brighter colours, the lumps and bumps are more obvious. 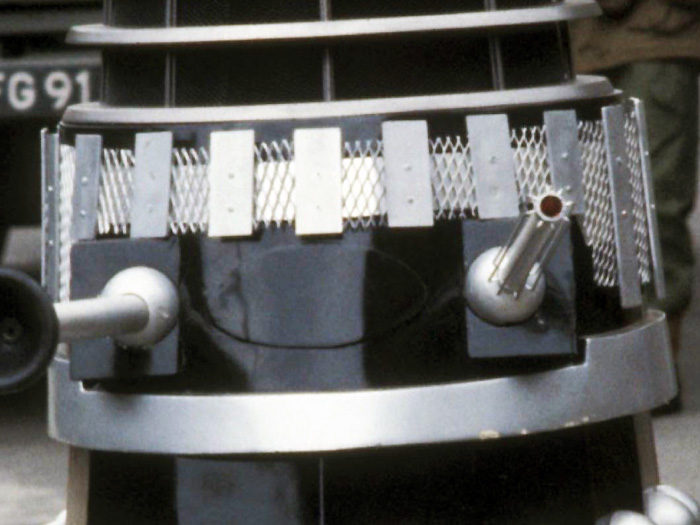 Many of the original shoulder sections built in the 1960s were still being used through the 1980s. Although they were given replacement collars and slats, the same fibreglass shell was retained. These original GRP versions actually outlasted the second batch of metal clad shoulders built by the BBC in the 1970s.

It wasn't until the introduction of the Imperial and Renegade Daleks in Remembrance of the Daleks that brand-new shoulder designs were introduced. The first of these new designs included moulded in collars on the Renegades, clearly visible in the photo. 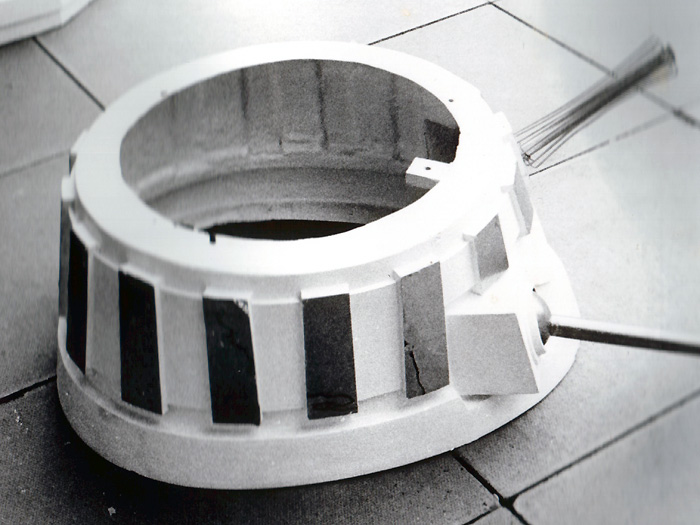 The second new shoulder design was for the Imperial Daleks in Remembrance of the Daleks. These Daleks also had shoulders with moulded-in features. This time it wasn't only the collars and gun/arm boxes but also the slats which were integral to the casting.

The entire shoulder assembly was one single unit with all the 'fittings' pre-moulded. The slats were picked out from the main body by the addition of a reflective gold covering, added to each one. Because of the design of these shoulder castings, the traditional lower collar overhang over the skirt is all but gone. 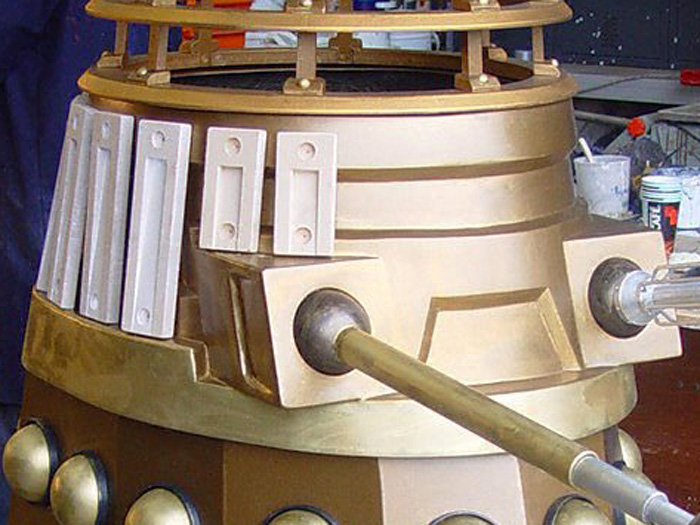 The shoulders of the New Series Dalek are a completely new build. Like the Imperial Dalek shoulders before them, the main shell is constructed entirely from fibreglass. With their integral collars, they are the most complicated shoulders of any built to date. There are two different 'depths' to the bands which circle inner 'core' of the shoulder section.

In addition, there are detail indents in the gun and arm box sides. The centre oval from the 70s and 80s, and the Imperial hexagon have been replaced with an inset section. The slats are separate and are added later after the shoulders have been painted. 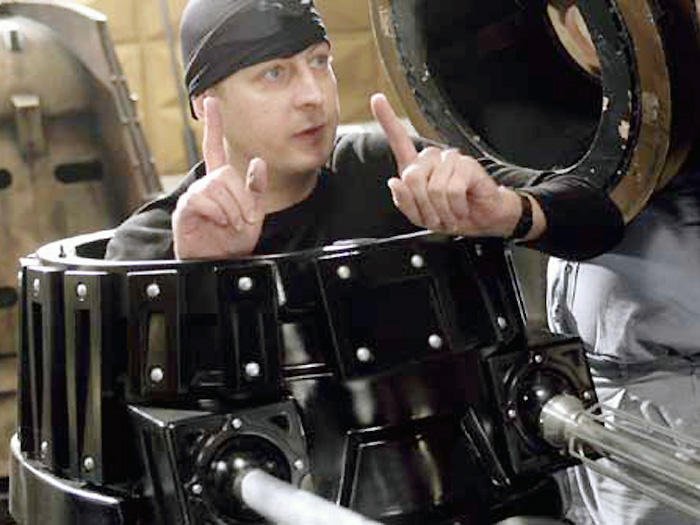 Again, there is no significant overhang where the lower collar meets the top of the skirt section. The shoulders simply sit on top of the skirt. The gun and arm box fronts have had detail added to them that is not part of the main shoulder mould. They are individual resin castings which are fixed in position during the finishing process.

On some later New Series Daleks, the shoulder and skirt sections were actually made as one single unit. Traditionally Dalek operators have accessed Daleks by lifting off the shoulders, but with these single piece props, they have to climb in through the upper shoulder (neck) hole. 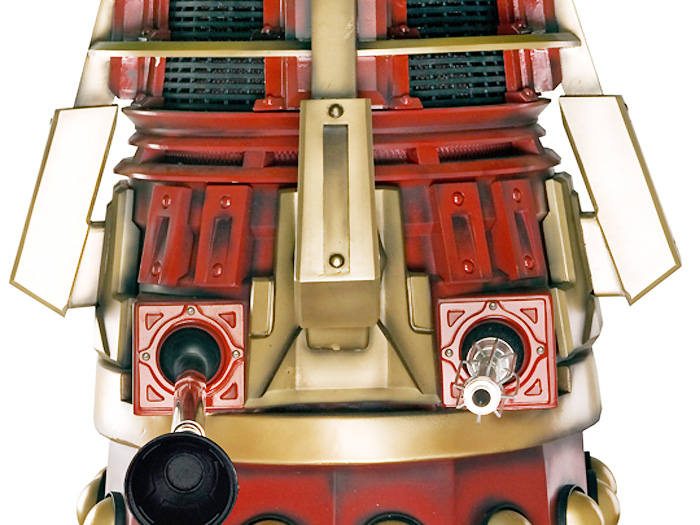 The Dalek Supreme, seen in the season four finale (2008) has a shoulder section, unlike any other Dalek. The basic design is taken from the standard shoulders of the New Series Dalek but has been modified radically by the addition of four large 'clamps' which project upwards and connect to the neck section.

Made from fibreglass, these clamps have a design which is similar to that of the (standard) slats. Their inclusion has significantly reduced the number of slats mounted on the collars. The large frontal slat (and lower shoulder recess) are lost completely. 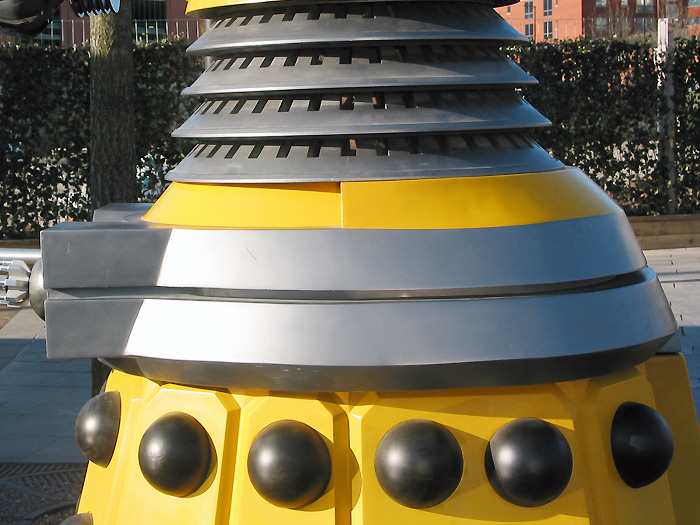 The shoulders on the re-designed Dalek are sleek and slat free, just like those seen on the early 60s Dalek. That is where the resemblance ends. The shoulder profile doesn't flow along the usual angles, in sympathy with the skirt. This makes for a very wide, broken-backed silhouette which becomes apparent as the Dalek is viewed from the side. The proportions, in relation to the skirt and the resulting position of the neck and dome radically alter the overall look, creating a hunched appearance.

The gun boxes no longer appear to be integral to the shoulders (though they are part of the moulding). They lack the elegance which recessing, between the box fronts afforded the previous Daleks. Possibly paying homage to the 60s Louis Marx toys?

Dalek shoulder sections are usually built from fibreglass (like the originals) or from wood/MDF. The following examples serve as a very brief introduction to the demanding process of building Dalek shoulders. 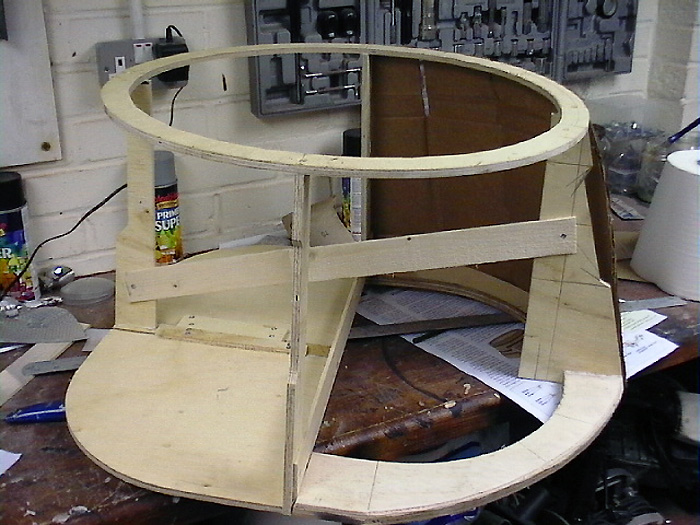 There are two main types of materials which can be used to build Dalek shoulders: wood/MDF, fibreglass or a combination. In order to make the shoulders from fibreglass, you must first produce a 'pattern' or 'plug' version of the part, from which the mould is created.

This is normally done by building the plug version from wood/MDF. In this series of photos, courtesy of Alan Orchard, we see both fibreglass and wood being used in shoulder construction. Builders who do not wish to use fibreglass can simply use the wooden version as the final product. The photo (left) shows the framework under construction. 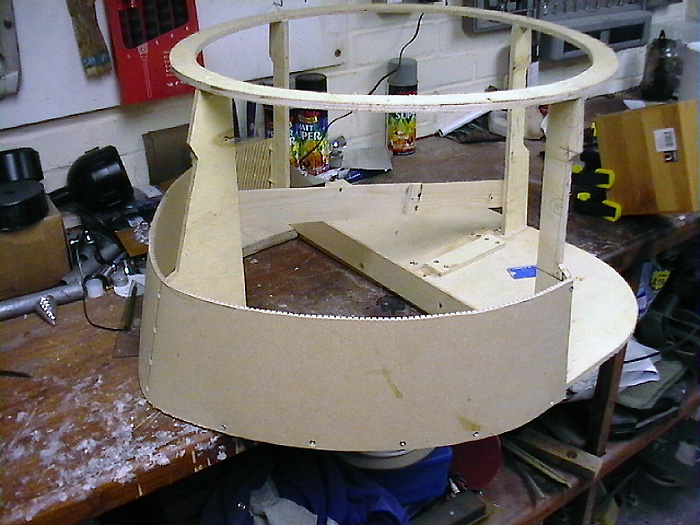 The frame is completed and the task of cladding it in a suitable material begins. Dalek builders tend to use 'bendy MDF', thin hardboard or thin standard MDF. Bendy MDF has a series of grooves cut into its underside which makes it easy to bend around the contours of any gradually curving surface. If hardboard or thin standard MDF is used, it is sometimes soaked in water before being fitted in order to make it more pliable.

The cladding process is much the same for any Dalek style. The main difference is in the complexity of the later props due to the various layers. 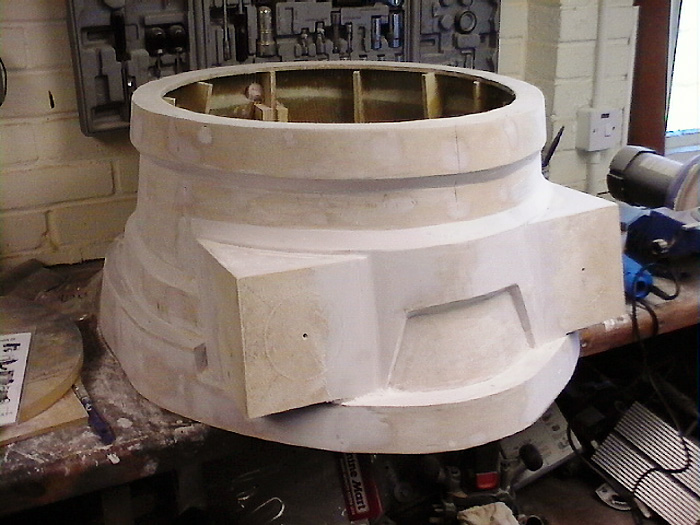 Builders who wish to have lighter, tougher Dalek shoulders use the wooden construction as a 'plug' from which to make a fibreglass negative mould. Before a mould can be made the surface of the 'plug' must be sealed and polished until a perfect finish is achieved. Then mould-release wax must be built upon the surface in order to prevent the cast from sticking to the mould. 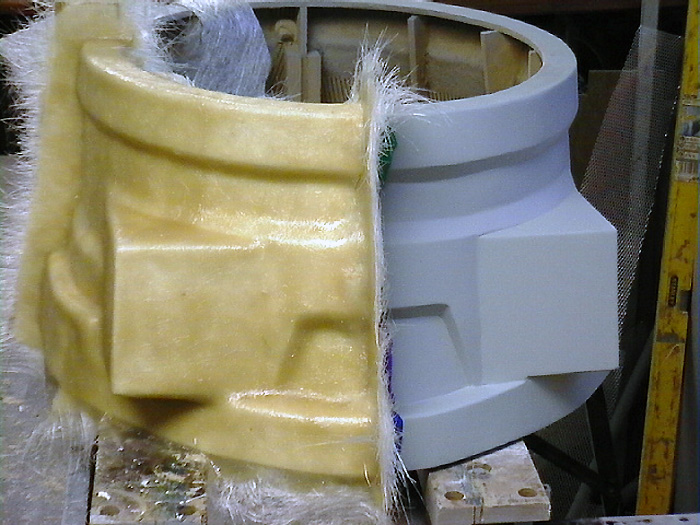 In this photo we see a section of the mould taking shape over the shoulder plug. Note that the plug has been thoroughly finished and waxed beforehand. The shoulder mould is being made in sections that will eventually bolt or clip together to form the complete mould. 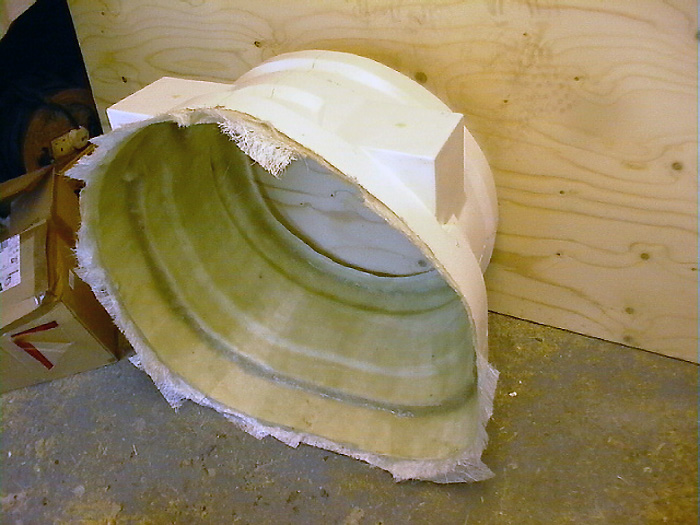 This final photo shows the end result. The mould sections have been removed from the 'plug' and then used to create a fibreglass 'positive' copy that is exactly the same as the wooden version. However, because it is made from fibreglass it weighs far less and will withstand being treated roughly.

This new casting is seen fresh from the mould and still needs to be trimmed and finished before it is painted, ready for the addition of slats etc. Any style of Dalek shoulders can be made in this way. If anything, the simpler Classic Dalek shoulders present fewer technical challenges.