In many ways, the Dalek skirt 'is' the Dalek. The skirt is the most deceptive Dalek section. It is often interpreted as being round, or having panels of equal dimensions, or having identical angles, front and back. This has lead to some very interesting fan builds and toys, especially in the early days. These days, the plans give you everything you need to know about the subtleties of the design. All that remains is to find out exactly what you're dealing with... 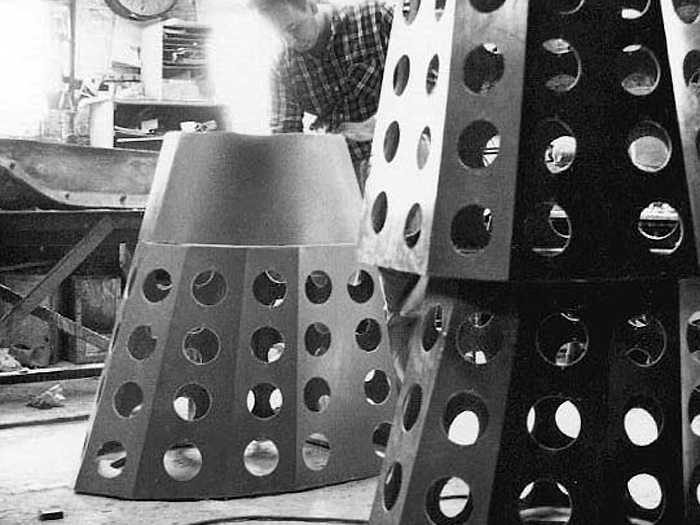 The original Dalek skirts from the 60s, both TV and movie versions, were made from fibreglass. They were created using a female mould with the fibreglass laid up inside. Every hero prop from the 60s was produced in this way. No screen-used 60s props had skirts made from any kind of wood, board or laminate.

The main advantage of fibreglass is its weight. Compared to wood and MDF, GRP weighs very little and is amazingly strong. It is ideal for prop manufacture. The photo (left) shows movie Dalek skirts being made. 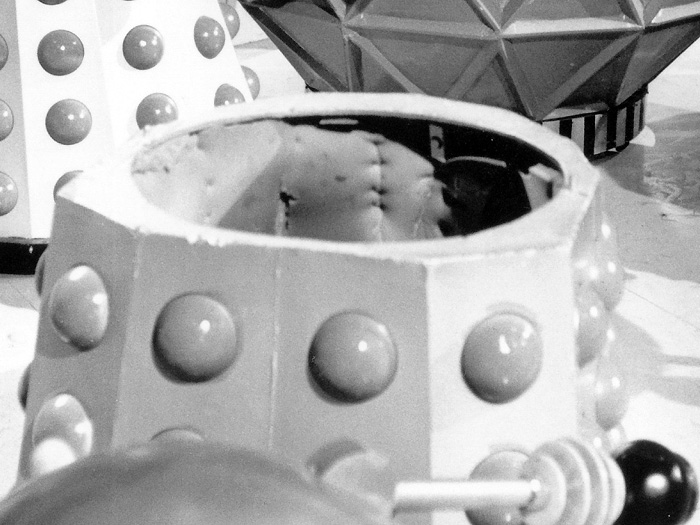 The skirt is open-topped, allowing the operator to climb in and out. Inside was a simple wooden bench seat for the operator to sit on. Most Daleks were moved by foot power, with the operator pushing the prop along with his feet.

The Daleks used for location filming in The Dalek Invasion Of Earth were allegedly fitted with hand-operated tricycles for propulsion, so the operators could move quickly along the pavements. Back in the studio, standard casters are evident in the shots where wheels are exposed. No screen-used classic Dalek has ever used electric motors as a means of propulsion. 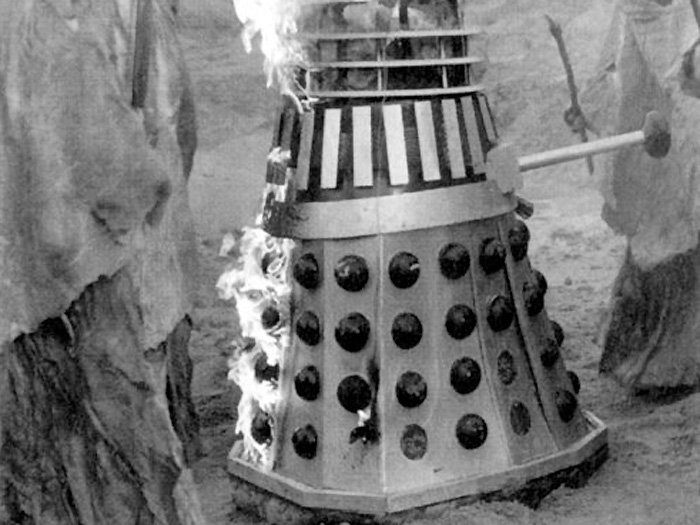 Fibreglass skirts were used throughout the 1960s and into the 1970s, painted various colours and became quite battered. It wasn't until the 1970s that wooden skirts began to make an appearance. Some stunt props had skirts made from hardboard in both decades (see photo from Death to the Daleks) but the 'real' props with wooden skirts did not appear until Planet of the Daleks.

Planet of the Daleks sees a new batch of props built as crowd fillers. These appear to have been put together quickly and have varying materials and degrees of workmanship. The design of the original fibreglass skirts appears to have been copied using wood. 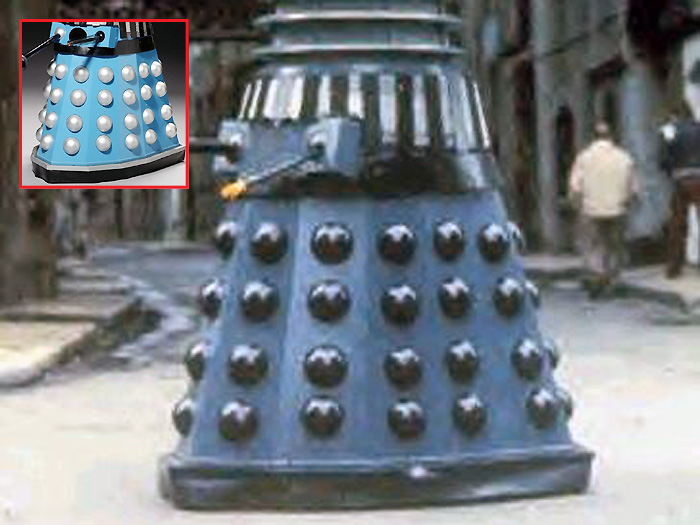 The strangest skirt of all belongs to the Dalek known as the 'Tussaud's' Dalek, named after the museum of the same name, where it was once exhibited. It first appears on screen in Destiny of the Daleks and also later in the 1980s in Resurrection of the Daleks, though going by its condition, it could be thought to predate both these stories by a number of years.

The skirt design is unique in that it has a rear section which slopes as much as, if not more than, the front. There are more than the average bolt/screw heads showing and an odd distribution of large hemispheres. 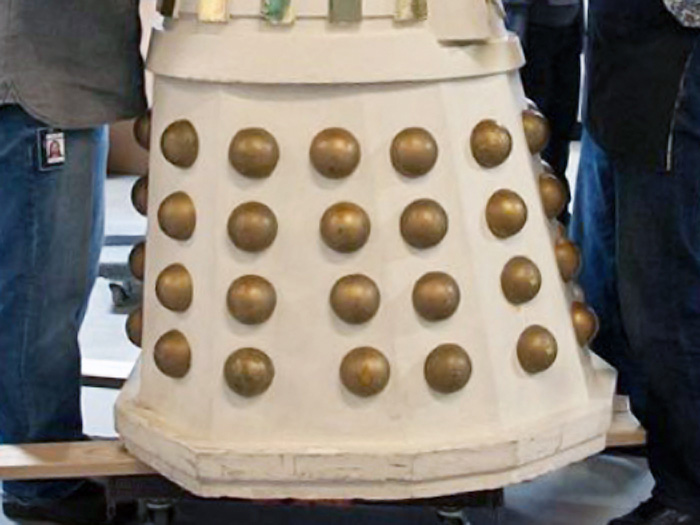 During the 1980s a major new Dalek build was undertaken and a number of new props were produced from completely new moulds, made to a revised design. Fibreglass was once again the material of choice for the skirt sections.

These new skirts, fitted to the new Renegade Daleks and the Imperial Daleks from Remembrance of the Daleks have a much more upright appearance than previous props. They have the same number of panels as the Classic skirts, but the angles and panel sizes are a complete departure.

The fender base is also integral to the skirt section, on these Daleks. Dalek builders tend to be divided in their opinions of these skirts. Some love them and some hate them. 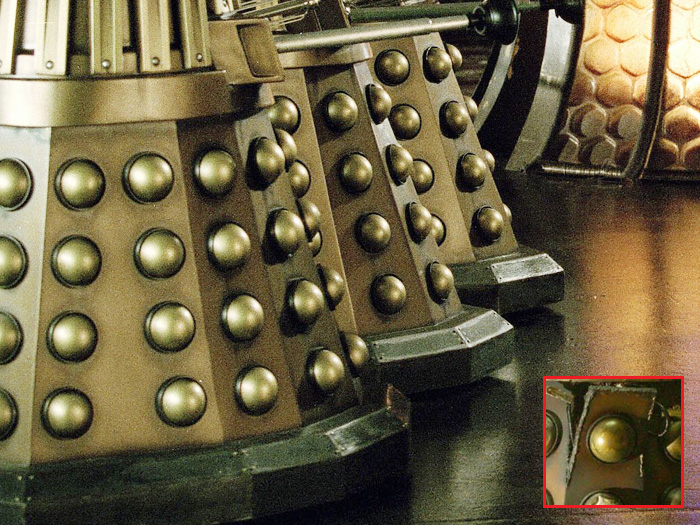 For their return to TV, in 2005, the Daleks were given back their original style skirts, virtually identical to the design produced by Shawcraft in the early 1960s. This is the only part of the New Series Dalek which has not been altered or augmented in any way (not counting the hemispheres).

The 'new' skirt has the classic twists clearly visible in the front panels. The only new feature of this skirt is the colour - bronze with weathering detail applied by airbrush. In the 2005 episode Dalek, we see behind some of the skirt panels on the damaged Dalek.

This is simply a standard fibreglass skirt which has had the thickness of the peeled back panel increased in order to give the impression of armour plating. 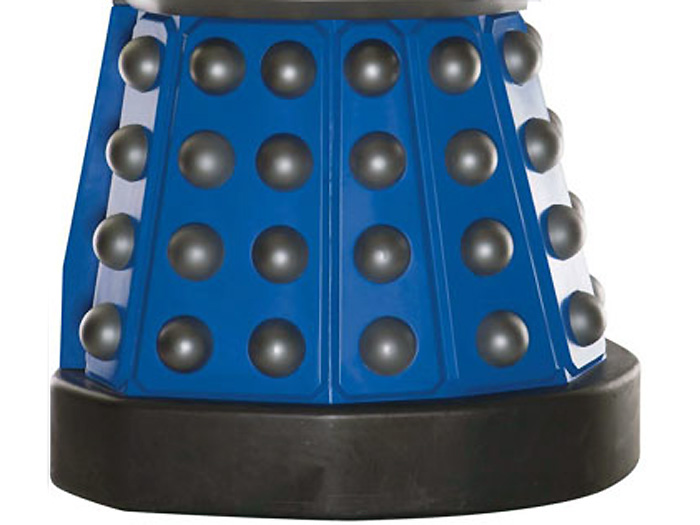 After nearly five decades without any significant change, the Dalek skirt design as we know it has been abandoned, in favour of a taller, bulkier version. Gone are the subtle panel twists and sharp angles, replaced by thick fascias with router cut, cabinet-like sides.

The rear panel no longer sports hemispheres, but has a vented spoiler-like assembly, in their place. The remaining hemispheres have been increased in diameter, from four to five inches, probably to retain some degree of proportion.

The overall shape is vastly different from that of any previous Dalek skirt(except maybe the Tussauds). Where the angles of the skirt and shoulder sections join, they appear to clash, rather than flow, creating a very unusual, profile. 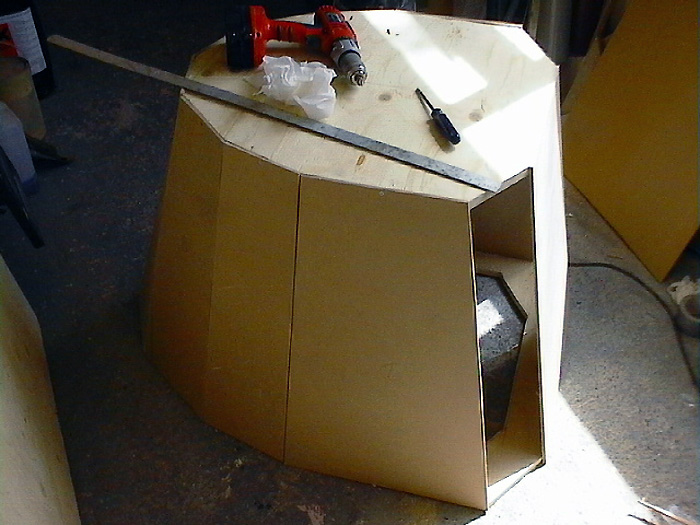 Most Dalek builders elect to make their Dalek skirt section from wood and thin MDF. This is a good solution if only one Dalek is to be made. If more than one Dalek is being built or if weight is a critical issue, it is possible to build a wooden skirt as a 'plug' and then use it to create a female mould from fibreglass. This is then used to cast up exact copies of the original wooden item.

Either method requires the construction of a wooden skirt section, so this is what is covered in the following section. In this photo (left) we see thin MDF panels being glued and pinned around a simple wooden frame 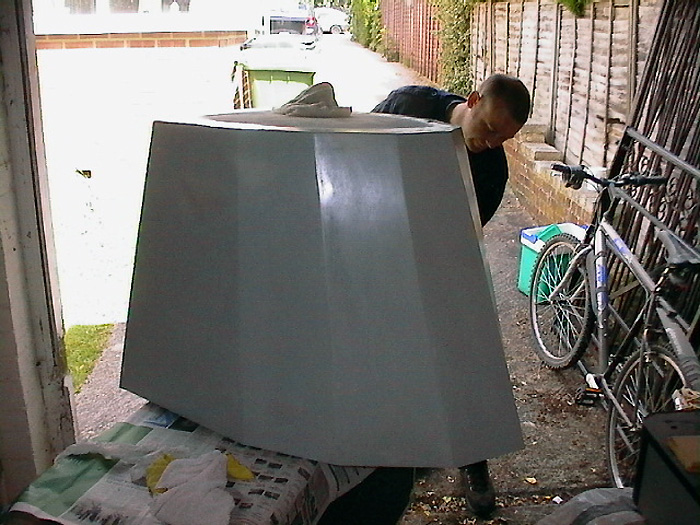 Once all panels have been fixed, any gaps are filled and then the whole assembly is sanded and sealed, before being given a coat of primer. At this stage, the top and bottom are sealed. If the wooden skirt is to be used for fibreglass mould making, no further cutting is required, just careful finishing and waxing.

If the skirt is to be used 'as is' for a Dalek, then access holes must be cut in the top and bottom. The skirt's shape makes it a very robust construction so internal bracing can be kept to a minimum. Wooden skirt panels are often reinforced on the inside with strips of fibreglass matting placed over the joints. 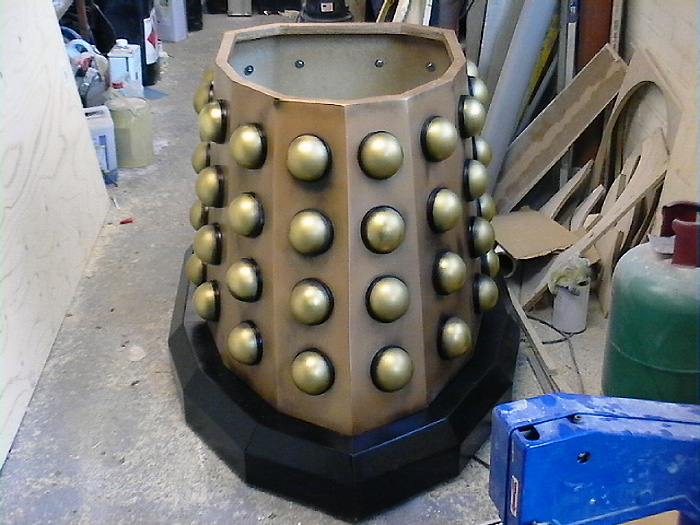 Here we see a finished wooden skirt section (pictures by Alan Orchard). The top and bottom access holes have been cut out and the final finishing is complete. A seat is added at this stage. This can be supported by a separate frame fitted to the base or running gear. Supporting the seat with just the skirt sides is not advisable.

In this instance the hemispheres are of the bolt-on variety, though push-throughs could also be used with this type of wooden skirt provided a means of attaching the oil seal surrounds was devised. A fibreglass version would be almost identical in appearance but would have the advantage of being slightly lighter and a little more resistant to knocks and scrapes. Both designs are strong enough to bear the weight of the Dalek shoulders, neck and dome.