Project Dalek offers plans for most types of Dalek. They are available free to Project Dalek Forum members. Join the Forum to gain access to the downloads. All plans booklets are presented in Portable Document Format (PDF). In order to read them, you must have the latest version of Adobe Reader installed.

You are unlikely to find better plans anywhere else. Our plans are the result of many hundreds of man-hours of effort and research. One word of warning: please AVOID the plans published in the Radio Times Doctor Who Anniversary Special from the 1970s. Some of the build theory is pretty good but the dimensions are massively inaccurate and will not build you a screen accurate Dalek.

All the Project Dalek plans are also available in printed booklet form, for those who don't have access to a printer. The Booklets are A4 in size and presented in full colour on 100g/m2 paper. Forum members can find details here. 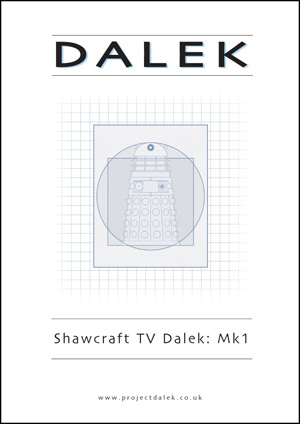 The plans have now been split into three separate booklets for the Mk1, Mk2 and Mk3 Daleks. This split helps to present the variations in a more detailed and logical manner. A great deal of new information has come to light over the last few years, some of it measured directly from original props, some derived by painstaking use of CG modelling and some coming from rare high resolution images. All this information has been gathered together for the first time and used to create this updated series of plans, which represent a significant advance in classic Dalek accuracy. 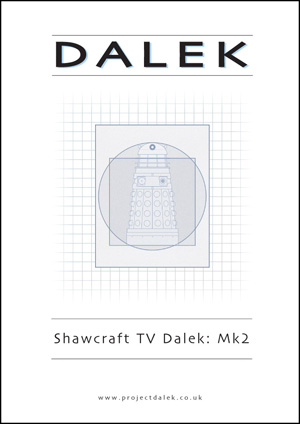 The plans have now been split into three separate booklets. This booklet covers the Mk2 Daleks, as seen in 'The Dalek Invasion Of Earth'. For the update, computer generated models were created in order to test the new dimensions for visual accuracy and to ensure that components work together as expected. Virtual Daleks were posed at angles that matched those seen in original photographs. The models and photos were then compared and inconsistencies addressed. Checking the plans using these techniques has achieved a level of accuracy that was impossible only a few years ago. 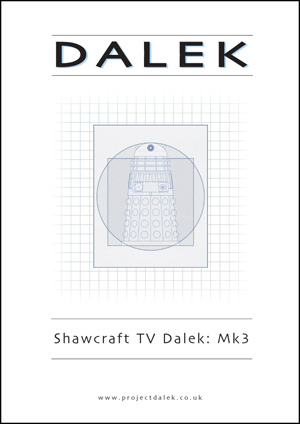 This third booklet from the split covers the Mk3 Daleks. As with the Mk1 and Mk2 plans, the split helps to present the variations in a more detailed and logical manner. The style of the plans remains much the same as in the previous booklets, with Malcolm Lear's original drawing style being used as a starting point to give the new plans a familiar feel. However, the bulk of the dimensions have been reviewed and the illustrations re-drawn to reflect the changes. These are the most accurate Mk3 plans ever released. They represent years of research and hard work. 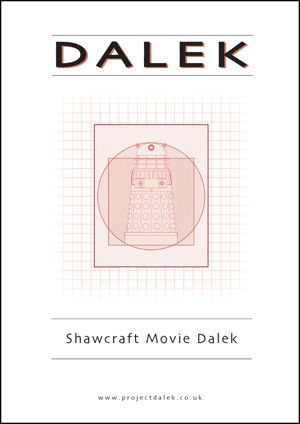 This booklet includes plans for the Daleks from 1960s Dalek movies. For the first time ever, details of all aspects of these Daleks have been brought together in one place. Along with a detailed two page history by PDF member 'moviedalek', the booklet contains plans for both the fender base and the claw, along with extensive annotations. Use these plans to build a Dalek from either of the two Dalek movies, Doctor Who & the Daleks or Daleks - Invasion Earth 2150 A.D. The bulk of the illustrations are shown in the colours of the 1st movie 'drone' Daleks, but this is purely cosmetic and the dimensions remain the same for all variants. 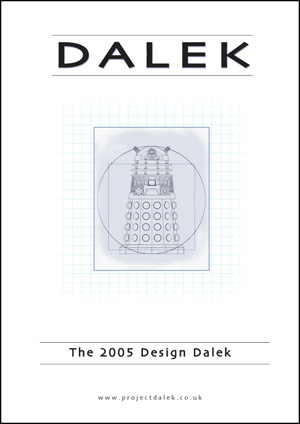 The updated version of the Dalek design which hit our screens in 2005. Also known as the 'New Series Dalek Plans', this booklet was developed after extensive research and access to original screen-used props by Project Dalek Forum members. Additional notes and comments have been included to help you along with your build. The plans also include dimensions for the 'cutting claw' attachment, as seen in 'The Parting Of The Ways'. In this latest revision, the gun and eyestalk layouts have been further expanded to include even more information. There is also much more detail on the plunger, which has been reworked, along with the eyeball. 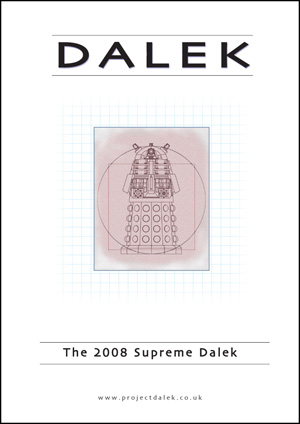 Plans for the amazing red Dalek seen in the series finale of Season Four. Not only does this plans set cover the basic design, used on the standard new series Daleks but also includes detailed information on the various changes and augmentations which are unique to this design. The changes to the neck and light cages are comprehensively covered, as are the new 'neck clamps' which give this Dalek its distinctive look. 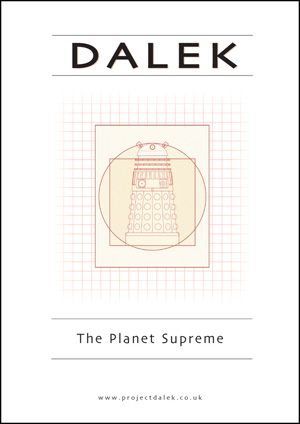 Plans for the converted movie Dalek prop which was borrowed by the BBC from Dalek creator Terry Nation and refurbished for the story 'Planet Of The Daleks'. While this Dalek is essentially a movie prop, there are some very specific alterations and subtle details which make these plans an essential read for anyone wishing to accurately reproduce this Dalek. The torch that was used for the eye is now almost impossible to find, so dimensions are given here for those who want to scratch build it. 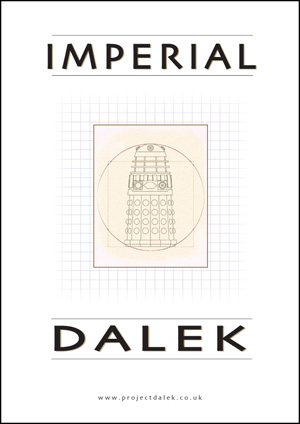 Finally out of beta and honed for accuracy, this booklet contains the plans for the Imperial Daleks featured in the 1988 story Remembrance Of The Daleks. The introduction and footnotes provide additional information on the construction methods employed on the original props. Essential reading for all Imperial Dalek builders and enthusiasts. 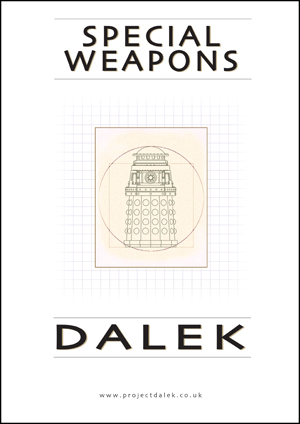 The long-awaited release of the Special Weapons Dalek Plans. This plans set has been under development for well over ten years. This release is very much a beta version but contains all the information you need to make a great start on constructing one of these unusual Daleks. Now available to subscribing 'Active Members'. (A full release will follow later.) 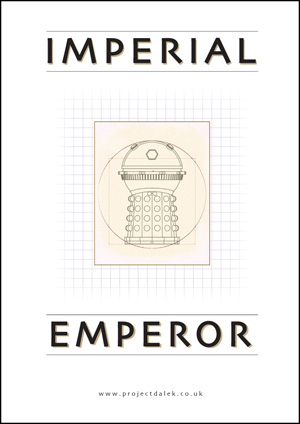 Plans for the Imperial Emperor Dalek, as seen in the 1988 story 'Remembrance Of The Daleks'. This booklet also contains an overview of how the original prop was constructed. This gives a valuable insight into the logistics of creating such a large and unusual Dalek prop. 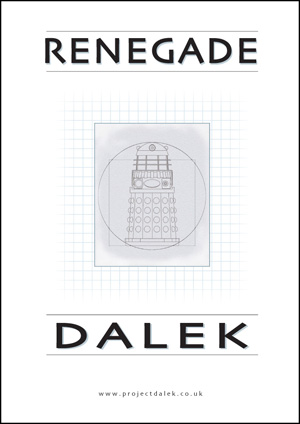 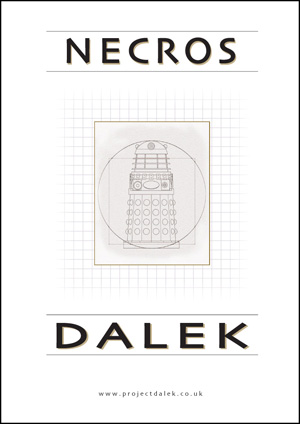 Plans for the Necros Daleks as featured in the 1984 story, 'Revelation Of The Daleks'. The booklet now runs to 20 pages with an introduction containing a potted history of the Necros props. These plans have recently been revised and updated to hone their accuracy. The plans are also now presented in millimetres. 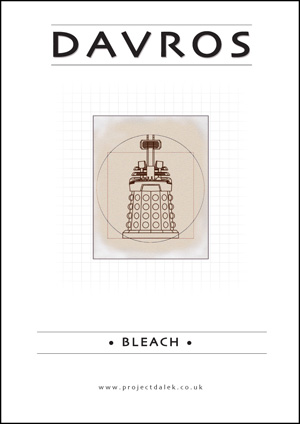 Not quite a Dalek, but definitely inspired by the Dalek's design, and a variation on the Dalek skirt. These plans give you all the information you need to create a life-size replica of the New Series Davros chair, as first seen on 2008 and also featured in 2015. The newly updated plans now include a revised introduction. This edition of the plans as been split from the Classic Davros Chair plans, making them easier to follow. 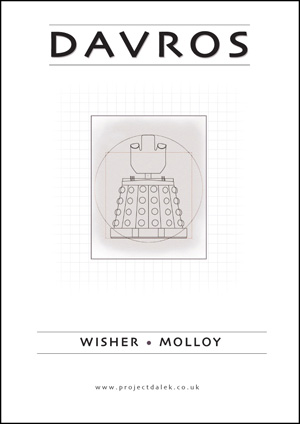 Now completely revised with new, more accurate dimensions supplied by Aaron J. Climas, following his extensive research. These plans give you all the information you need to create a life-size replica of the Classic 1970s/1980s Davros Chair. This edition of the plans as been split from the New Series Davros Chair plans, making them easier to follow. Also included are the basic console layouts for the chair variations. 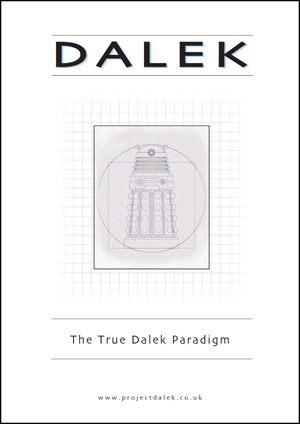 This is for all those who remain unhappy with the New Dalek Paradigm. Project Dalek has produced an exclusive, alternative version. These plans were produced using Peter Mckinstry's original concept artwork as reference, combined with our years of experience and understanding of original, accepted (and much loved) Dalek prop geometry. The result is something which follows Peter's concept closely but also manages to retain more of the key design cues and proportions which have made the Daleks so popular, over the last five decades. This is our take on what the New Dalek Paradigm could have been.. 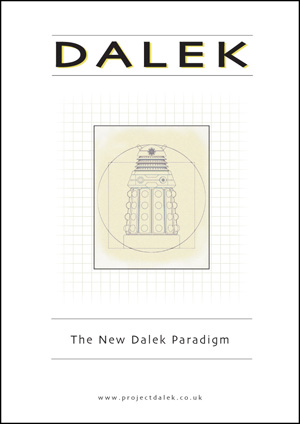 A beta release of plans for the 2010, New Dalek Paradigm (NDP) design. Although this Dalek variant is widely regarded as unpopular, these plans were a long awaited addition to the Project Dalek downloads library. Most of the dimensions are derived from a computer generated model, which has been through a very long period of development. The starting point was the hemisphere size, which was known for definite. The sizes for (just about) all of the other parts were derived using the hemisphere as a starting point. 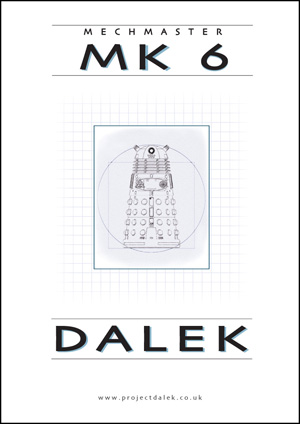 This is the next phase of Dalek 'evolution' as realised through the imagination of Project Dalek member 'Mechmaster', (designer of the CGI STORM model). A unique Dalek design, these plans bring Mechmaster's 'Mk6 Dalek' within the reach of all 'real world' Dalek builders. 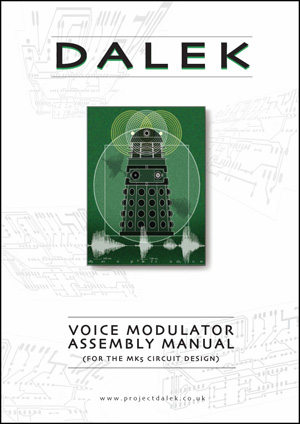 This booklet contains all the information you need to build a voice modulator using the Mk53 circuit board (available from the Project Dalek Forum). Pre-built options are also available from time to time. The manual contains easy to follow build instructions, a parts list and PCB layouts. 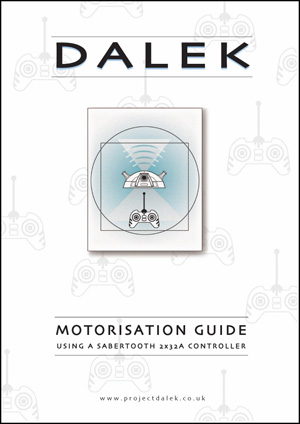 This manual details how to motorise your Dalek using a power wheelchair base with a Sabertooth 2X32A controller and standard model radio control set. A common request is for information on how to turn your prize Dalek in to a fully remote controlled version. There are several ways to achieve this aim and this document describes one of them that is proven to work reasonably well. 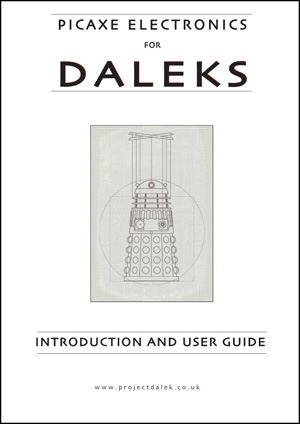 A 24 page booklet by Project Dalek member Murray Jones. The document comprises of an introduction and user guide which outlines the PC control applications that can be achieved by using the Picaxe micro-controller system to drive the motorised sections of an advanced Dalek build. Parts lists, wiring diagrams and sample programs are all included here. 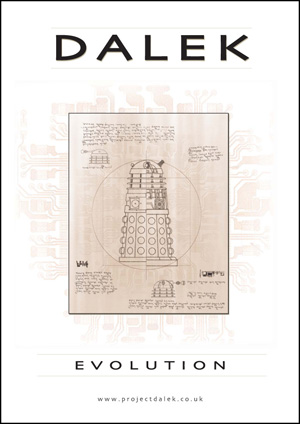 Ever wondered about all the Dalek style variations that have occurred over the years? This download covers all the variations with a keen eye for detail. With contributions from several Project Dalek Forum members, this booklet will help you sort out exactly what your Dalek should look like, if you intend to match a design from a certain story, episode or era.

But that's not everything...

There are also more downloads containing CAD files for the 2005 Series Dalek, templates for Dalek dome creation and also for accurately laying out the curves of the shoulders. We also have a vast number of files for use with 3D printers and CNC cutters, covering many Dalek parts.