The Gathering was a Dalek/Doctor Who themed charity event organised by The Sons of Skaro. There were various Doctor Who related celebrity guests present on the day, including Colin Baker, Nicola Bryant, Terry Molloy, David Goodersson, Nabil Shaban and Michael Jayston. There were also talks, Q&As, cosplay competitions, workshops, and the Sons of Skaro raffle for a full-size Dalek.

The main focus of the event was an attempt to beat the Guinness World Record for the largest Gathering of Daleks. The record was missed by only 9 Daleks, but the event did manage to set an unofficial record of 74 real, full size Daleks in one place. The official Guinness record of 95 Daleks, at Leicester in 2008 managed 44 actual Daleks plus 51 costumes.

The Sons Of Skaro promise to be back in the future with another charity fundraising event and another attempt at beating the official Guinness world record. Check out their website at: www.sonsofskaro.com.

The Gathering is returning in 2020 for another attempt at the World Record. The new venue is the Oasis Leisure Centre, Swindon. Find the details here. 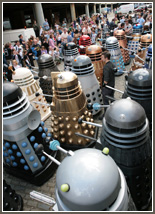