The Project Dalek Voice Modulator Mk5e is our very own voice conversion unit that allows you to speak like a Dalek. It is an ideal solution for those who want a cost-effective way to change their voice when they are inside their Dalek, operating it.

Here are some technical details of what is inside the 'PDF Mod Mk5e'...

The heart of the circuit is an LM13700 chip from Texas Instruments. We've made an attempt to make an affordable circuit that is as easy to construct as we could manage and does a good job reproducing the surprisingly broad range of effects used on the show over the years.

The circuit can be broken down into 6 sections:

For this circuit, we used what is referred to as a virtual ground. It consists of a simple opAmp voltage follower. A resistor divider creates a reference at 1/2 the total supply voltage. This is fed to the + input of one channel of the opAmp. The opAmp output then “follows” this fixed reference at the output. 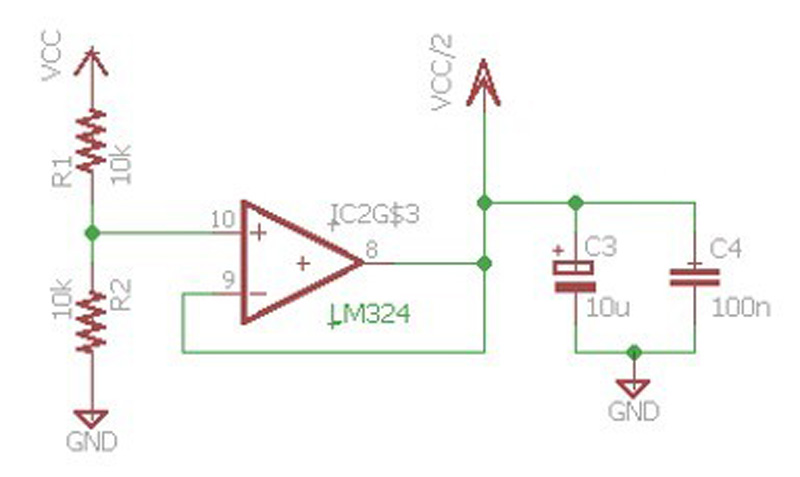 The circuit is designed for an electret microphone.  Most head-worn mics you’ll find nowadays are electret, so this seemed like a logical choice.  If you intend to use a dynamic microphone, the circuit can be modified to accommodate, but should not be used as-is.

R21 supplies “phantom power” to the microphone. C21 blocks the DC offset from the signal so only the voice gets into the amplifier. The opAmp is configured as a simple inverting amplifier with a gain of (R23+R24)/R22, so ranges from a minimum of 1 up to a maximum of 21.

D3 and D4 act as a crude noise gate. Basically, the inline back-to-back diodes block signals below ~0.5V from getting to the next stage. This should block light breathing and background noise from getting through.  R25 limits the output current of the amp and the Green LEDs clip the signal introducing distortion on the voice. Similar circuits are used in solid-state electric guitar amplifiers.

You can use the green LEDs as a visual indication as to how much distortion is added to the voice. Turned down so there is no light from these LEDs will sound the cleanest (though there will still be some distortion from the noise gate). The higher the gain, the brighter the LEDs, the more distortion.  How much is up to you.

I won’t go into too much detail here. If you are interested in the theory a quick google search will turn up better descriptions than I can fit into this post. This one is a slight variation on a “Diode Stabilized Wein Bridge” in that we used LEDs instead of regular diodes. This was done for two reasons.  First, so the amplitude will be sufficient for the next stage, and second, so you have a visual indication that the circuit is working.

There’s also a small resistor in series with the LEDs to soften the stabilization and reduce distortion. The frequency is determined by R11/R12 and C11/C12. Extra spaces are included to do some fine-tuning of the modulation frequency if desired. The frequency is fixed, not continuously variable like other ring modulators.  This was done to keep it simple and cheap.

This is the important part. “4 Quadrant” just means it can multiply two voltages, and both can be positive or negative. The chip we used for this is the LM13700 dual transconductance amplifier. The datasheet for this chip includes an example of a 4 quadrant multiplier that uses a single side of the chip. 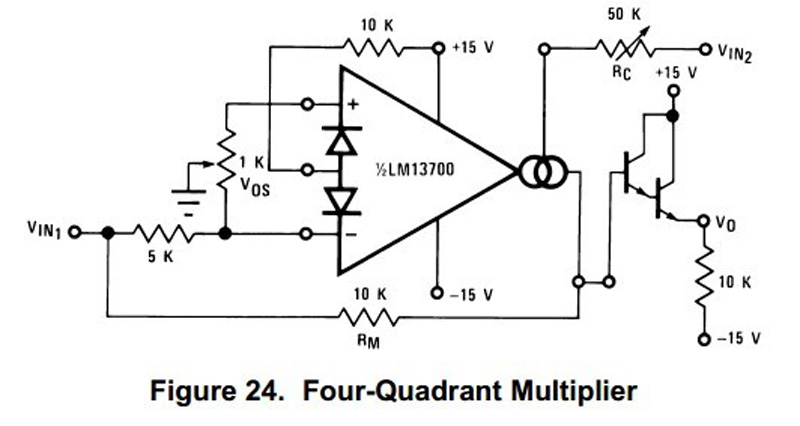 This was the basis of the MartMod Mk3. Thanks go to Vince Martyn for graciously providing us with his circuit to get us started in our development.  Though it works well, it requires very careful selection of the resistor Rm to get it balanced perfectly. The PDF Mod Mk5 is instead based on the 2 Quadrant multiplier from the datasheet. 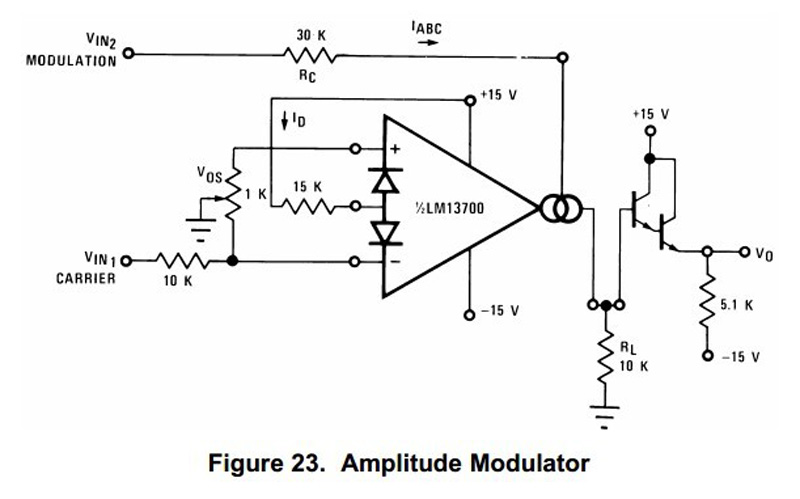 Again since the modulation signal stays on one side it is considered a 2 quadrant multiplier. When the output from both sides are added together you get the same effect as a 4 Quadrant multiplier without needing to use odd resistor values. Here’s a picture illustrating what the circuit is actually doing, and that section of the PDF Mod Mk5 schematic. 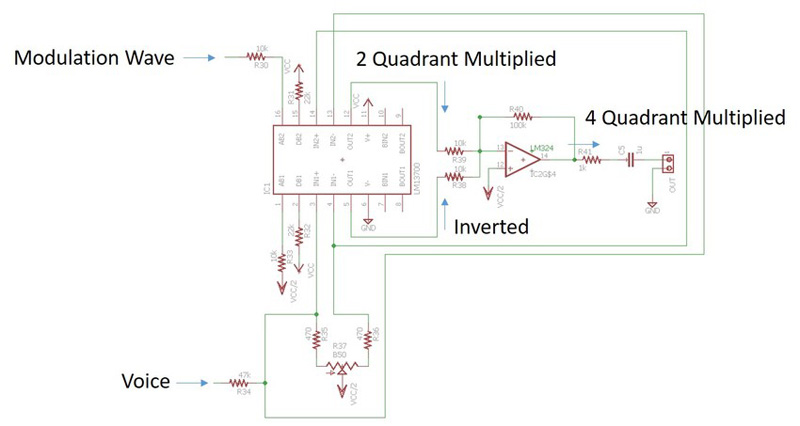 This is simple, it just adds a stereo auxiliary input to the same summing circuit of the multiplier. This allows the playing of a gun sound, music, or another effect through the same power amp as used for the voice. 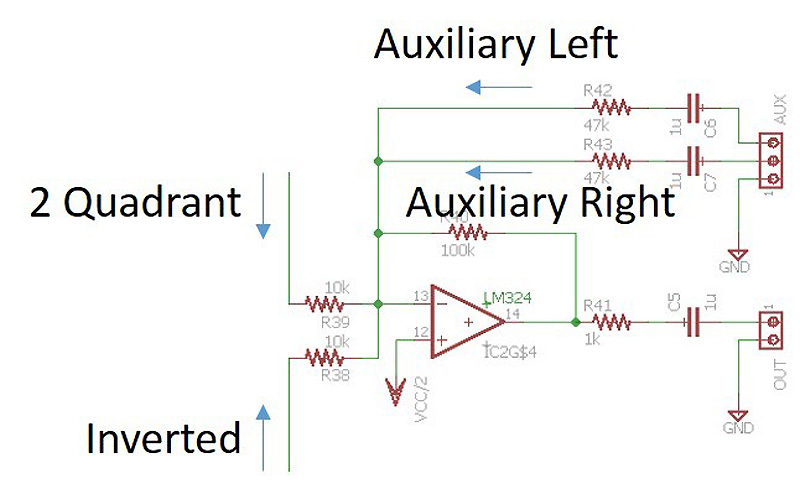 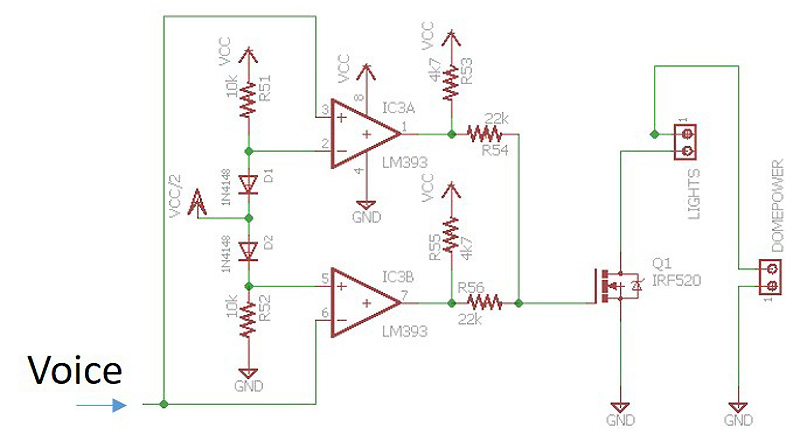 The PDF Mod Mk5e is occasionally available as a pre-built unit, which is offered for sale, from time to time, via the Project Dalek Forum. However, the unit is firmly aimed at the DIY enthusiast. With that in mind, the 'Voice Modulator Assembly Manual' is available (via the Forum) for everyone to download and use to build their own unit. A comprehensive parts list is contained within the manual. 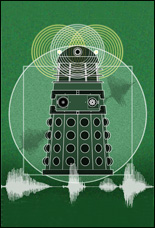